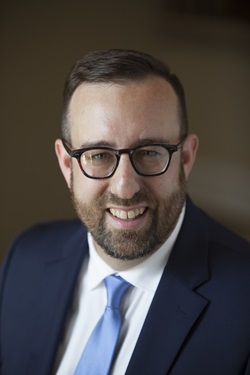 Anthony Elia has been named J.S. Bridwell Foundation Endowed Librarian and Director of Bridwell Library at Perkins School of Theology, Southern Methodist University, effective June 1. He succeeds retiring Director Roberta Schaafsma, who has served in that role since April 2007.

Elia, Director of Library and Educational Technology at Christian Theological Seminary in Indianapolis since 2013, will be responsible for providing vision, strategic direction, and operational leadership for Bridwell Library. In addition, he will promote the development of collections and oversee the library’s public service and user education efforts.

He brings significant expertise in library science and educational technology, which he has utilized in both U.S. and global contexts. From 2010-13, he served as head Public Services Librarian at Burke Library, Columbia University, and was a lecturer in theological writing at Union Theological Seminary, both in New York City. In addition, he has held positions at the JKM Library of McCormick Theological Seminary and Lutheran School of Theology at Chicago, the American Theological Library Association, and the Regenstein Library, University of Chicago.

The author of numerous publications, he will present “The Theology of Cybersecurity” at the June 2018 ATLA Annual Conference in Indianapolis. Elia has held numerous leadership positions in his field, including membership on the Directors’ Committee of the Private Academic Library Network of Indiana (PALNI), where he also served as secretary of the Executive Committee. He was chair/president of the New York Area Theological Library Association (NYATLA) from 2011-12 and vice-president of the Chicago Area Theological Library Association (CATLA) in 2010. In addition, he was chair and past co-chair of the International Relations Round Table IVC Committee, American Library Association (ALA) from 2013-15.

Join us in congratulating Anthony on this new position!