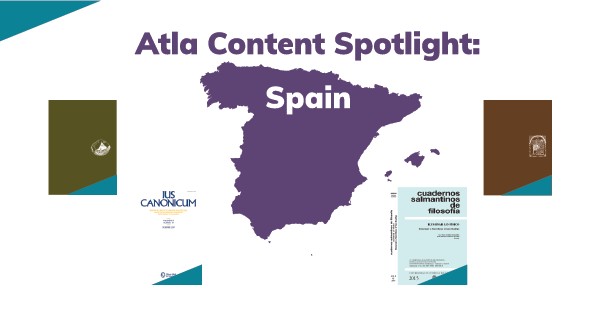 Spain has a tradition of institutional religion publishing that dates back for centuries. The university system is currently responsible for printing a majority of the country’s academic journals, and Atla is fortunate to have relationships with several of these schools and their presses.

Three universities have partnered with Atla for multi-title full-text agreements: Universidad San Dámaso, Universidad de Navarra, and Universidad Pontificia de Salamanca. Between them, they account for thirteen of the fifteen Spain-based titles in the Atla databases and cover topics ranging from Spanish church history to the broader philosophy of religion. All three universities were founded in the Catholic tradition, which is reflected in their journals. Below you will find more information on these institutions and their titles.

The University of San Dámaso is a Catholic university based in Madrid. It was founded more than a century ago as the Conciliar Seminary of Madrid and shifted to a full-time public university in 1990. It has a long-standing press that publishes four journals, all of which are in the AtlaSerials PLUS® (Atlas PLUS®) database. Ius Communionis focuses on religious law and the Catholic Church. Revista Española de Teología is a contemporary review of Christian and systematic theology. Teología y Catequesis is known as a stalwart at the intersection of education, theology, and Christianity. All three of these are exclusively published in Spanish, but perhaps the most well-known San Dámaso journal is the multilingual Estudios Bíblicos, which we have featured previously. This long-running publication began circulation in 1929 and contains biblical studies articles in Spanish, English, French, German, Italian, and Portuguese. Respected as a journal of the highest scholarly merit, Estudios Bíblicos is a perennial favorite of the Atla user base.

Interested in accessing these journals? Ask your librarian how to access our databases, Atlas or Atlas Plus.

The University of Navarra is a private Catholic university in Pamplona, Spain, founded by St. Josemaría Escrivá de Balaguer, the founder of Opus Dei. He started the university as a corporate work of the apostolate of Opus Dei, and this heritage is reflected in the Catholic publishing the university still does today. Navarra’s journals include Anuario de Historia de la Iglesia, a long-running and well-known chronicle of Catholic Church History. Ius Canonicum focuses on Catholic church doctrine and Catholic law. Scripta Theologica covers Catholicism but also discusses general Christian historical theology and systematic theology. All three of these journals can be found in AtlaSerials® (Atlas®).

The Pontifical University of Salamanca was one of the first universities Atla approached when we started Atlas PLUS a few years ago, in part due to the strong interest Atla users showed in their publications. They have six journals licensed with Atla that cover a wide range of topics. Salmanticensis and Revista Española de Derecho Canónico focus on Catholic church doctrine and religious law. Diálogo Ecuménico centers around interfaith dialogue and Christian unity movements. Familia, Cuadernos Salmantinos de Filosofía, and Helmántica cover community, philosophy, and language within religion, respectively. All six, including their extensive backfiles, were added to Atlas PLUS for its launch.

There are two other titles from Spain to round out our full-text coverage. Archivo Teológico Granadino focuses on the history of modern theology. The journal publishes studies on the post-Tridentine period, unpublished manuscripts of the same time, and a bibliographic section with specific newsletters on historical-theological issues.

The well-respected journal Estudios Eclesiásticos from Universidad Pontifica Comillas de Madrid was the first journal from Spain available in full-text in Atla research tools. Founded in 1922 by the Society of Jesus in Spain, it publishes primarily in the fields of Theology and Canon Law.

Atla is looking forward to continuing to add high-quality scholarship from around the world to our suite of research tools. If you have a journal recommendation for us, please submit it here.

In addition, the complete title lists with comprehensive coverage and language information are available here.