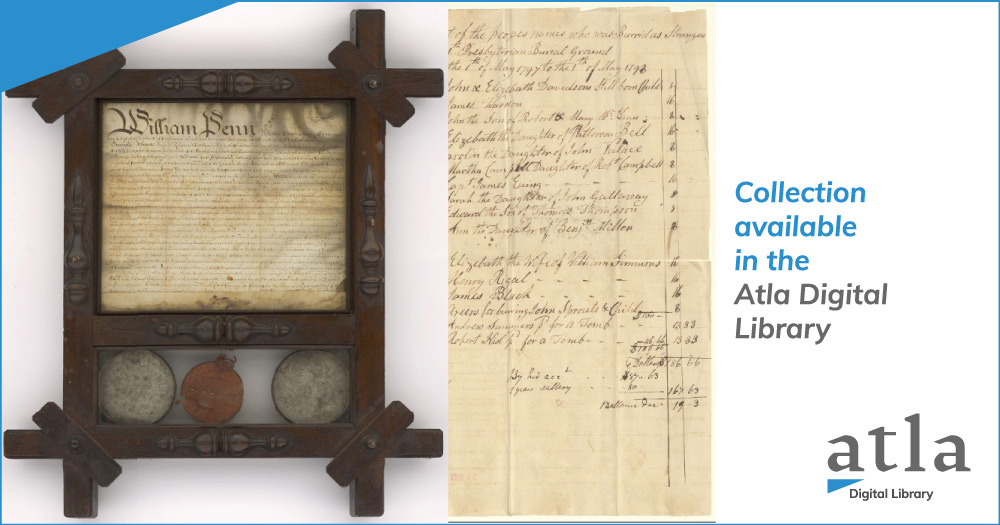 Last year, the Council on Library and Information Resources (CLIR) awarded a three-year Digitizing Hidden Special Collections and Archives grant to the Christ Church Preservation Trust and the Athenaeum of Philadelphia. The grant enabled the digitization of over 41,000 records of Philadelphia’s oldest congregations, ranging in date from 1708-1870, and now about 26,000 of the records have been made available. As part of the project, Atla is making these public domain materials fully available through the Atla Digital Library, our portal for religion and theology digital collections. By bringing the records together in the Atla Digital Library, users are encouraged to explore and discover these previously hidden collections across multiple institutions.

A member of the Religious Society of Friends, or Quakers as they were derisively called, Penn shared with his coreligionists a belief that, by virtue of their direct knowledge of and communion with God's divine authority, their precepts of religious liberty, political freedom, and pacifism were bound to take root in the new colony.

Settled by William Penn in 1681 as a center for religious freedom, Philadelphia provided refuge for newcomers of many faiths. In the 18th century, Philadelphia served as the epicenter for political thought and action, as delegates to the Continental Congress and Constitutional Convention met, debated, and worshiped together there. Since the days of William Penn’s “holy experiment,” Philadelphia has encouraged the cooperation of different faith groups, a tradition that is honored by this project.

As part of this project, the records from six individual congregations (African Episcopal Church of St. Thomas, Christ Church, Gloria Dei Church, Mikveh Israel, St. George’s Methodist Church, and St. Peter’s) and three collecting institutions have been scanned. These records range from vestry and trustee minutes to sermons to baptismal, circumcision, marriage, and burial records and reflect a period in American history that is not always well documented. They often precede official record-keeping such as city directories or census records and the minutes sometimes reflect the social and political conflicts of the day.

Many of the records provide further details on topics such as the role of the church in free and enslaved African communities from the mid-1700s through the Civil War, the rise of new religious denominations, and the diversity of religious thought in the colonial metropolis of Philadelphia. Because a lot of these records remain with their original congregations, they are often overlooked by scholars and other researchers.

Entitled “Digitizing the Records of Philadelphia’s Historic Congregations: Providing Documentation for the Political, Social and Cultural Developments in Philadelphia,” this project builds on Christ Church’s earlier efforts to place more of its archival resources online. Previously, funding by the Barra Foundation and private donors allowed for online viewing of archival and artifact collections. Additional support from The Pew Charitable Trusts allowed for the scanning and transcription of three volumes of early vestry minutes as well as completion of a database of all baptismal, marriage, and burial records through 1900. View the Christ Church genealogy resources.

In 2016 CLIR announced the funding of a project to scan Congregational Records in New England under the guidance of James Fenimore Cooper, Jr., a professor at Oklahoma State University and Margaret Bendroth, Executive Director of the Congregational Library in Boston. That project inspired this idea of bringing together a diverse group of historic Philadelphia congregations, scanning their records, and placing them online in one unified website. A number of these venerable institutions enthusiastically endorsed this project and agreed to apply for a collaborative grant to digitize their often overlooked records.

CLIR’s support of digitizing hidden collections seemed tailor-made for this type of project. When the first proposal to CLIR fell short, additional partners and congregations strengthened the subsequent application, and Atla was tapped to provide a means for viewing the records through its Digital Library platform. The University of Pennsylvania stepped in and agreed to offer long term preservation of the scans through OPenn, the library’s digital site. To date, more than 26,000 documents have been scanned. In the months ahead, more records will be added as well as transcriptions. As records have been added and continue to be added, scholars and family historians are making use of them.

Atla is proud to be a part of facilitating access and usage of these important historical records.

Highlights from the Collections

Founded in 1695, Christ Church was the first Anglican church to be established in Pennsylvania. Members of the Continental Congress and early government officials worshiped here and seven signers of the Declaration of Independence are buried on Church property. When the congregation grew too large to be accommodated here the vestry built St. Peter’s at the southern edge of the city in 1760 and later St. James. Those United Churches remained a unit until the 1820s and 1830s. Christ Church is an active Episcopal parish today as well as a National Historic Landmark.

The records scanned for this project consist of vestry minutes, parish records, accounting records, and sermons.

Congregation Mikveh Israel (officially Kahal Kadosh Mikveh Israel), is also known as the “Synagogue of the American Revolution.” The oldest Congregation in Philadelphia, Mikveh Israel was informally established by religious-minded Jews in British America during the 1740s and has become the second-oldest surviving Congregation in the United States. In Pennsylvania, and Philadelphia in particular, Jews found an environment of tolerance for their religious beliefs and traditions made possible by William Penn’s “great experiment.” By 1775, a community 300 strong existed in a city of 35,000. Among items in the archives of Congregation Mikveh Israel are letters written by George Washington and Abraham Lincoln, and a public subscription list for the 1782 building signed by Benjamin Franklin, David Rittenhouse, and other civic leaders.

In the 17th century, Swedish settlers landed on the banks of the Delaware River establishing churches in Wilmington, Tinicum, and by the mid-17th century in Wicaco outside of what would become Philadelphia. That latter church, Gloria Dei, is Pennsylvania’s oldest congregation. The existing church was built between 1698 and 1700 and originally served a Swedish Lutheran congregation. The church today is part of the Episcopal Diocese and a national historic site. Archival records scanned as part of this project include vestry minutes, registers, financial, correspondence between the original Swedish parishes, and the churches in Philadelphia, Delaware, and New Jersey as well as their “miscellaneous records.”

In 1760 a group of congregants from Christ Church, supporters of the Rev. William Macclenachan, an Anglican minister of evangelical leanings, seceded from Christ Church. They drafted articles of agreement for a new church, St. Paul’s, and promptly set about raising funds to construct it. Built on Third Street, below Walnut, St. Paul’s opened for services in 1762 and remained an active congregation throughout the nineteenth century. The Church’s building still stands, now home to Episcopal Community Services. St. Paul’s records, housed at the Episcopal Diocesan Archives include vestry minutes, baptismal, marriage, and burial records as well as some financial records.

Presbyterian Historical Society was organized in 1852 and is the oldest denominational archives in the United States. PHS serves as the national archives of the Presbyterian Church (U.S.A.) and exists to collect, preserve, and share the story of the American Presbyterian and Reformed experience with Presbyterians, the scholarly community, and the general public. They have contributed three collections to the project:

Records scanned for this project include congregation minutes, pew records, and lists of burials.

Records scanned for this project include minutes, pew records, deeds, and burial records.

Third Presbyterian Church began in 1761 as an extension of First Presbyterian Church, located in a house at Second and South streets. In 1768, the congregation of the Third Church moved into their new building at 4th and Pine streets. The church called George Duffield as their new pastor in 1771, without the concurrence of First Church. The resulting rift cemented the split between First and Third. The congregation still worships at 4th and Pine today although the building has been extensively renovated since colonial times. The church is popularly known as “Old Pine” while its official name is Third, Scots and Mariners Presbyterian Church, reflecting two of the mergers that comprise the continuing church.

Records scanned for this project include trustees’ minutes and pew records.

Notable for its early leadership in Baptist organization and evangelism, the First Baptist Church of Philadelphia was prominent both in its region and city and in the transatlantic community of Baptists. Begun in 1698 as a mission of the more suburban Pennepack (now, Lower Dublin) Baptist Church, First Baptist soon became the leading congregation for the city, region, and colonies, gaining independent status from Pennepack in 1746. By the 1760s, the first decade for which minutes survive, the congregation had gained prominence beyond its modest size. When in 1814 Baptists from twelve states gathered to form a national organization to support Baptist missions, the meeting was at the First Baptist meeting house in Philadelphia. Throughout the next century, the congregation grew in numbers and influence in the city and in national and global mission programs, despite conflicts related to theology, leadership, and relationships with daughter churches, including two competing First African Baptist congregations.

Graduate Theological Union (GTU) is the newest contributor to the Atla Digital Library. Check out their collection of 433 items.
Post

View the Newest Contributors to the Atla Digital Library

We are pleased to welcome Union Presbyterian Seminary Library as the newest contributor to the Atla Digital Library! UPSem Library’s ten digital collections include 207 items made up of materials.
Post

We spotlight The National Library of Israel and their rare collection of communal ledgers from long-lost Jewish communities of Europe.
Post

Beta version of the Jesuit Online Bibliography is now available, containing more than 15,000 items. Designed for anyone interested in Jesuit history, spirituality, educational heritage, and pedagogy.