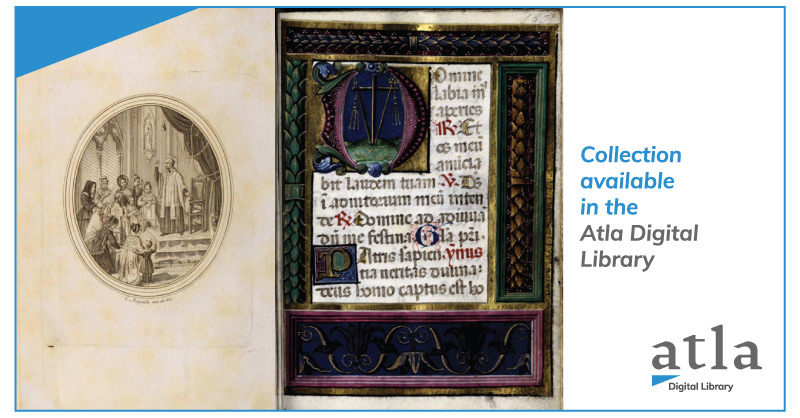 We are pleased to welcome Fordham University Libraries as the newest contributor to the Atla Digital Library! Fordham’s seven collections include 1,147 items made up of pamphlets, books, sermons, poetry, letters and video.

Explore highlights from these collections below.

Political and religious pamphlets of the Italian unification, 1815-1871

This collection of approximately 1600 short printed pamphlets was published in Italy, largely from 1815-1880, and markings on several of the items appear to link the collection with Cardinal Carlo Luigi Morichini (1805-1879) as a former owner. The pamphlets reflect the Catholic Church’s outlook on and response to the sweeping changes occurring in 19th-century Italy, a period which witnessed the national unification of the Italian peninsula and the corresponding secularization of civil, political, and educational institutions. The pamphlets also reflect Morichini’s interest in various types of charitable institutions, especially hospitals, prisons, schools, and savings and loan organizations founded for the benefit of the poor. The bulk of the pamphlets were published in the former territory of the Papal States and the Papal Legations, where Morichini was active.

Cardinal Morichini, the former owner of many of the pamphlets, served in several administrative, ministerial, and diplomatic posts in the Papal States before being ordained Bishop of Jesi in 1854. Throughout the career he was also devoted to service, serving as an administrator of several charitable institutions and hospitals in Rome and elsewhere. In particular, he was interested in the spiritual care of the poor, prison reform, and education, and he published one of the most comprehensive surveys of such institutions in 19th century Rome.[1] He was also an important figure in the financial administration of the Papal States during a period of fiscal crisis, and involved in the creation of savings and loan institutions (Casse di risparmio) intended to help the poorer classes save money and improve their financial situation. Though moderate in his political outlook, two stints in jail during the early 1860s arising from the chaos of the incorporation of Jesi into a unified Italy embittered him towards the national revolutionary government, which he discusses extensively in some of his published letters, poems, and tractates. In 1871, Morichini was appointed archbishop of Bologna, and he died in Rome, his birthplace and longtime home, in 1879.

By making the pamphlets available digitally, Fordham University Libraries hopes to contribute to historical research on the Italian unification, but think that the pamphlets may be of interest also to researchers interested in the process of nation-building and the dynamics of church and state. Owing to Morichini’s interest in social justice and the reform of financial institutions and prisons, the pamphlets also have a resonance with political discourse in the United States in the early 21st century. Although the Italian unification has been extensively studied, Lucy Riall notes that the reaction of the Church to the unification remains somewhat unexplored: “Religion still remains somewhat unrepresented in the new historiography [on the Italian unification]: there are some interesting studies of the fusion of religious symbolism and language with the discourse of the nation, but far fewer which examine the Church’s ideological and tactical response to the manipulation of its vocabulary by the nationalists.”[2] Fordham University Libraries hopes that making these pamphlets accessible online can help researchers address this need for further inquiry.

You can see the full Political and religious pamphlets of the Italian unification, 1815-1871 collection in the Atla Digital Library.

The Atla Digital Library brings together in a singular, searchable platform digitized collections from libraries, religious institutions, and other organizations worldwide who collect and preserve texts, records, maps, photographs, recordings, and other materials. The items found in the Atla Digital Library are of importance to those with an interest in researching, studying, teaching, and otherwise searching for historical and archival content in religion and theology. Learn more on how to become a contributing institution.

Check out all of the over 125,000 works in the Atla Digital Library.

Please join us in welcoming Fuller Theological Seminary as the newest contributor to the Atla Digital Library. Check out these highlights from their collections.
Post

The Atla Digital Library is expanding with new collections, initiatives, and opportunities. Learn more on how to get involved!