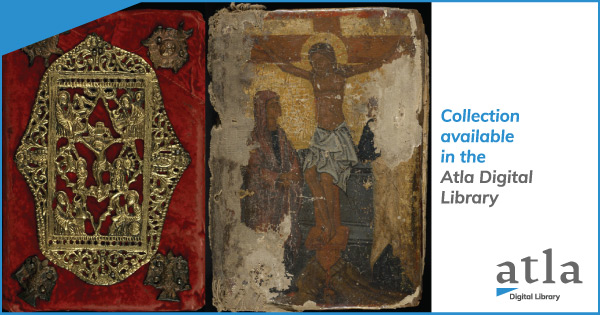 We are pleased to welcome the University of Chicago Library as the newest contributor to the Atla Digital Library! The library has contributed the Edgar J. Goodspeed Manuscript Collection which includes sixty-eight early Greek, Syriac, Ethiopic, Armenian, Arabic, and Latin manuscripts ranging in date from the fifth to the nineteenth centuries. The acquisition of these hitherto unknown manuscripts was spearheaded by Edgar J. Goodspeed in the first half of the twentieth century in order to support new scholarship in the humanities.

Explore highlights from this collection below.

Argos Lectionary aka “the Gangster Bible”

The Argos Lectionary is said to have belonged to a church in Argos, Greece, and to have been damaged during the Greek War of Independence (1821-1829). In the late nineteenth century, it belonged to Nikolaos Papadopoulos. It was brought from Greece to the United States by the family of Michael Biskos. The University of Chicago acquired it in 1930 from the family of Mike Potson, who owned Colosimo’s, a restaurant frequented by members of the mob. It is claimed that Al Capone and other Prohibition-era gangsters swore oaths on the volume during induction ceremonies at the Chicago restaurant. As a result, it was described in the media as “the Gangster Bible.”

You can see the item in the Atla Digital Library here:  https://dl.atla.com/concern/works/sj139g95d

This is a talismanic scroll fragment in Greek and Arabic. It is one of two extant sections of a single scroll. The other portion is held in the Pierpont Morgan Library of New York, as Ms. M. 499.  The scroll was written and illuminated in the fourteenth century, in either Constantinople or in Trebizond, respectively the present-day Turkish cities of Istanbul and Trabzon. A colophon on the Morgan fragment (reverse) identifies the scribe who wrote the Arabic text as the monk al-Bashūnī, and the date of completion as 1383 (1694 of the Seleucid era).

You can see the item in the Atla Digital Library here:  https://dl.atla.com/concern/works/dj52wm03b

This is a praxapostolos in Greek with a half-leaf of a twelfth-century lectionary (front pastedown). The marginal lectionary apparatus identifies lections by title, or occasion and incipit. The placement of the Epistles of Paul before the Catholic Epistles corresponds to a change in reading order during the ecclesiastical year made in the twelfth century.

You can see the item in the Atla Digital Library here:  https://dl.atla.com/concern/works/2r36vc06z

This is a gospel lectionary in Greek. It is a synaxarion with ecphonetic notation. The manuscript is judged to have been written on the island of Cyprus in either the late twelfth or early thirteenth century.

You can see the item in the Atla Digital Library here:  https://dl.atla.com/concern/works/41687z661

The Atla Digital Library brings together in a singular, searchable platform digitized collections from libraries, religious institutions, and other organizations worldwide that collect and preserve texts, records, maps, photographs, recordings, and other materials. The items found in the Atla Digital Library are of importance to those with an interest in researching, studying, teaching, and otherwise searching for historical and archival content in religion and theology. Learn more on how to become a contributing institution.

Check out all of the over 121,000 works in the Atla Digital Library here: https://dl.atla.com.

Atla member institutions that have digitized collections without a platform for hosting and public viewing may now contribute those collections to the Digital Library.
Post