Atla Memorials 2020: Remembering our Members and their Legacies

It’s been a year of deep loss for many of us, and we mourn those members of our community who have passed on. During Atla Annual 2020 Online, we took a moment to remember them and their many achievements. 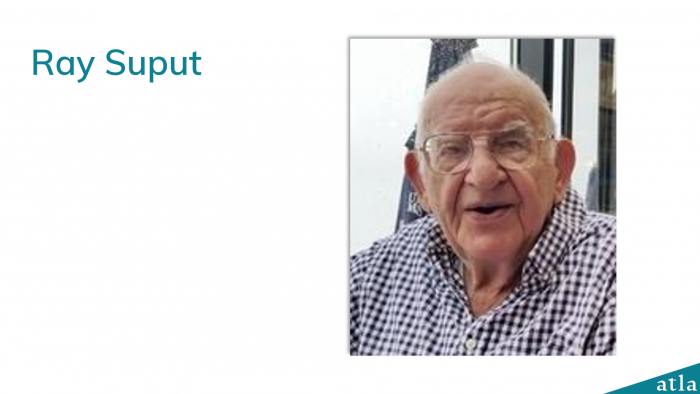 Ray Radoslav Suput, died in April of 2018 after a long and eventful life. Ray was born in 1922 in Columbus, Ohio, but was raised by his maternal Aunt in the Plitvice Lake region in the former Yugoslavia, now Croatia. As an expert in Serbo-Croatian and Italian languages, Ray served as an interpreter for the Allied Control Commission working with refugees in Italy during World War II. Before retiring in 1987, Ray served in multiple roles at Ball State University in Muncie, Indiana, including Director of Libraries, Department Chair, and Professor. He was proud of his involvement in the design and building of Bracken Library to which he walked or rode his bike each day. Ray retired to Columbus, Ohio where he was active in his church and the Columbus African Violet Flower Society, and continued to ride his bike for many years.

We give thanks for the life and work of Ray Suput. 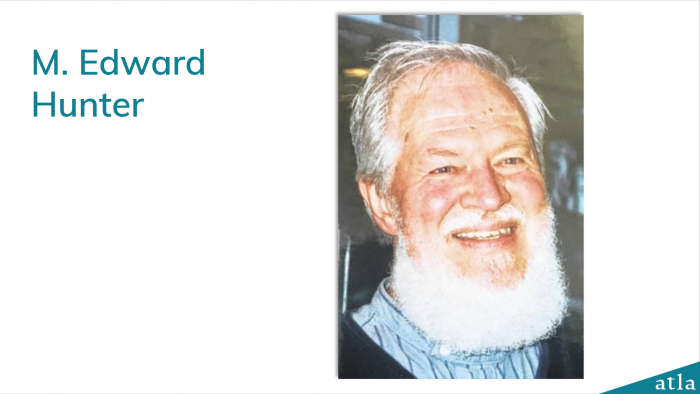 Ed Hunter of Delaware, Ohio, died in May of 2018, at the age of 87. Ed was a lifelong student, who loved words, language, and books. With degrees from Indiana University, the University of Chicago Divinity School, and Simmons College, he succeeded in forging a career that combined his passions for religion, education, and books, as a theological librarian, for five years at Bexley Hall Seminary and twenty-eight years at the Methodist Theological School in Ohio, and as a professor of Greek, Hebrew, and religious interpretation of novels. Over the years, he had a passion for many things, including art, music, opera, nature, plants, birds, and books. He was a role model for following one’s interests, rather than conforming to others’ expectations – always preferring to read a book, needlepoint, or listen to opera with little care for sports or popular trends. He was an early feminist, advocating for increased opportunities for women, and supporting his wife Melva’s political career. He was active throughout his life in social justice work – a devotion that has inspired his friends, children, and grandchildren to do the same.

We give thanks for the life and work of Ed Hunter. 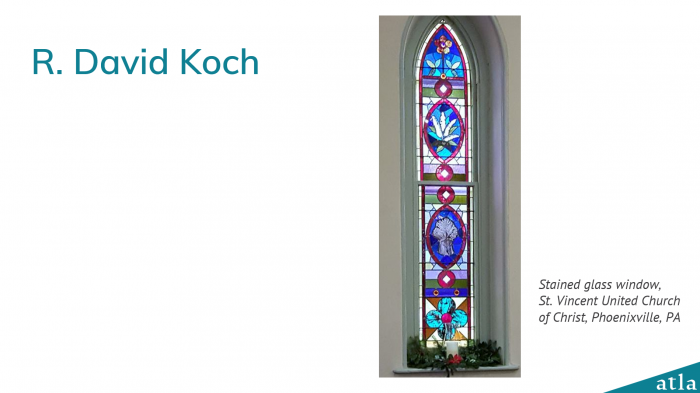 R. David Koch, died in June of 2017 at the age of 89 in New Holland, Pennsylvania. He worked as a theological librarian for the Austen K. deBlois Library of Eastern Baptist Seminary, now Palmer Theological Seminary, and was an interim pastor at the United Church of Christ Churches. He was a humble and gentle man, and never spoke of his own accomplishments. In his retirement, David researched the meaning of the symbols of his church’s stained-glass windows. He then gave a presentation to the church family that everyone enjoyed and found inspiring. David had been an only child and married late in life. According to their pastor, their wedding is remembered as one of the greatest events in their small church’s history. His wife was an elementary school teacher at the time, and she invited her entire classroom of children to attend their special day. Everyone who was present on that day recalls that they never saw a happier couple.

We give thanks for the life and work of David Koch. 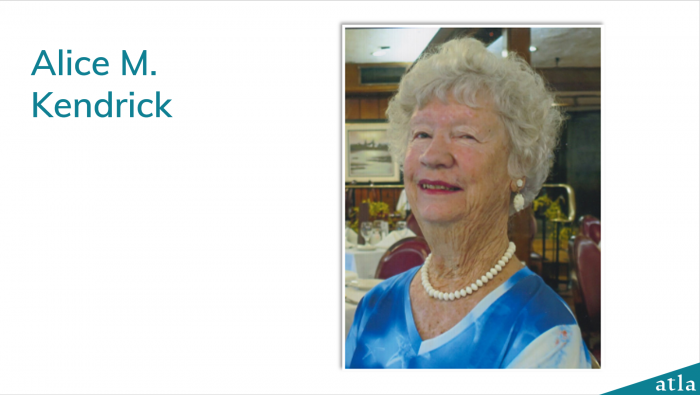 Alice M. Kendrick, of Freeport, Maine, died suddenly on June 17, 2019, at the age of 86. For thirteen years, beginning in 1967, Alice was the Assistant Director of Records and Information Center for the Lutheran Council in the United States. In 1980, she was appointed as its Director, a position that she held for seven years. During that time, she was also the Director of the Oral History Collection of the Archives of Cooperative Lutheranism. An avid supporter of oral histories, Alice founded the Lutheran Church in America Oral History Project. In 1982, Alice was an invited speaker on Oral History for Theological College at Toronto Conference. It is no surprise that when she retired, Alice became the Oral Historian for the United States Golf Association.

We give thanks for the life and work of Alice Kendrick.

Thank you to the Atla Conference Committee for organizing, writing, and presenting these memorials at Atla Annual 2020 Online.

Do you already miss Atla Annual? We have new session recordings available on Sched!