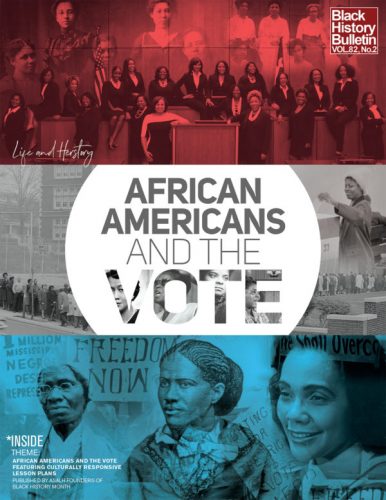 Carter Godwin Woodson, “the father of black history,” was a historian, journalist, and educator who instituted Negro History Week in 1926 in order to address the invisibility of black people in American public life. Woodson understood the importance of honoring the rich culture and contributions of African Americans to America. Black history is, after all, American history. Every year a theme is given to the celebration of Black History Month. This year, the theme is African Americans and the Vote, a poignant reminder during an election year of the struggle African Americans had to endure to secure the right to the ballot box.

This year’s Black History Month theme speaks to the ongoing effort to ensure the protection of voting rights. The year 2020 also marks the 100 year anniversary of the Nineteenth Amendment, which granted women the right to vote; 150 years since the Fifteenth Amendment (1870) which granted black men the right to vote after the Civil War; and 55 years since the Voting Rights Act of 1965. In thinking about ways to honor the Black History Month theme, we should be reminded that the challenge to secure voting rights for African Americans did not start nor will it end with the passage of these landmark pieces of legislation.

While national attention has been focused on Russia’s disinformation campaign during the 2016 elections, little attention has been paid on the impact of new voter registration laws on election outcomes or whether it has disenfranchised African Americans. According to the Brennan Center for Justice, twenty-five states have enacted new voting restrictions since 2010. In June 2013, the United States Supreme Court, in the Shelby County v. Holder ruling, vacated the heart of the Voting Rights Act of 1965, allowing nine mostly Southern states with a history of engaging in racial discrimination to change their elections laws without needing to secure advance federal approval (i.e., preclearance). The new voting restrictions take many forms, including strict photo ID requirements, the closing of polling places, racial disparity in wait times at polling places, purging voter rolls, challenging citizenship status, and reconfiguring election districts.

NYU’s Stern Center for Business and Human Rights recently released a report assessing some of the forms and sources of disinformation that social media may play during this year’s presidential election campaign. One of the report’s predictions is that it is the domestic production of disinformation which is more likely to occur than false content from foreign sources. If past elections are any indication, African American communities are more likely to be targeted by disinformation campaigns. This assessment makes clear that efforts to suppress the vote can no longer be viewed as a relic of the past. Voter suppression simply has gone digital.

What Can We Do?

So far, the charge to counter “fake news” and disinformation campaigns has been left to corporations like Google, Facebook, and Twitter to figure out. Problematic as that may be, theological librarians do have an important role in helping their students to think critically and be ethical users of information. However, we also have a responsibility to rethink the media and information literacy tools we use, and whether they are enough to grapple with the ever-changing information landscape. How can we help students recognize their own biases in addition to the biases in the media landscape? How do we train and equip students with the needed tools to navigate and participate ethically in the digital world? This year’s Black History Month theme should inspire and remind us of the spiritual empowerment that Black Christian thought and the Black Church provided during the civil rights era. After all, the civil rights movement was just as much a religious movement as it was a political one.

Select Books on the Struggle for African American Voting Rights

On Account of Race: The Supreme Court, White Supremacy, and the Ravaging of African American Voting Rights by Lawrence Goldstone (Counterpoint, 2020). ISBN: 978-1640093928

This Worldwide Struggle: Religion and the International Roots of the Civil Rights Movement by Sarah Aransky (Oxford University Press, 2017). ISBN: 978-0190262204

This article is part of the Atla Committee for Diversity, Equity, & Inclusion’s semi-regular articles designed to provide theological and religious studies librarians with resources and advice for providing equitable access and research to the full spectrum of human diversity.

The DEI Committee shares what diversity, equity, and inclusion means to them individually and how this helps them fulfill their committee's charge.
Post

‘Hospitality’ in Archival Collections Related to the Study of Religion

Tomoko Shida, the winner of the 2019 Atla Diversity Scholarship, discusses hospitality in archival collections and how we can share the stories of the 'other'.