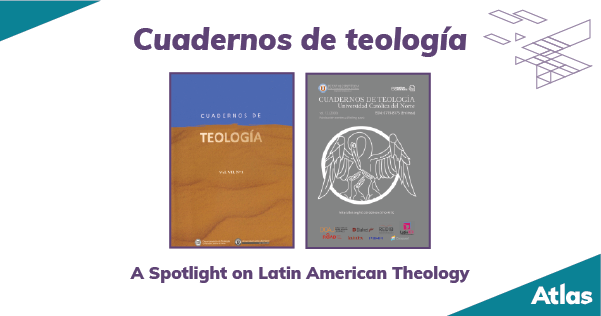 Atla Product Specialist recently spoke with Dr. Pablo Andiñach from Pontifica Universidad Católica Argentina about the life of Cuadernos de teología, a journal dedicated to supporting the holistic, spiritual development, and formation of individuals, involving the understanding of and dialogue between faith, culture, and science from the ethical and moral perspective in an evangelical context. Cuadernos de teología was published by Instituto Superior Evangélico de Estudios Teológicos (ISEDET) in Buenos Aires, Argentina, until 2012.

Dr. Pablo Andiñach was a professor at the school of theology (Instituto Superior de Ciencias Religiosas), and in 1996, was appointed Director of Cuadernos de teología, following with the journal’s tradition of always having a faculty member act as journal director. Dr. Andiñach worked on the journal for fifteen years.

Read on to learn more about the history, audiences, and lasting scholarly significance of Cuadernos de teología.

Cuadernos de teología began publication in 1969 and was published several times a year until ceasing publication in 2012. It was created as a platform for Latin American theology in dialogue with the Global North. Each issue included articles from Latin American (60%), US and European authors (40%), often in discussion with one another from their distinct global points of view.

The initial inspiration and support came from ISEDET, offering a place for faculty to publish their research.

Within ISEDET, there were five dedicated sections of study. Cuadernos de teología reflected those five content areas of the school in its scope of scholarship: bible studies, systematic theology, history, practical theology, and the social sciences.

When it came to soliciting and searching for scholarship to be included in the journal, about 30 percent came from ISEDET faculty members, with the remaining 70 percent split among scholarly connections throughout Latin American, personal connections of Dr. Andiñach, and new connections and journal article ideas formed through attending lectures. Regardless of the source itself, the sourcing process was very personal and intentional.

Each issue included articles from Latin American (60%), US and European authors (40%), often in discussion with one another from their distinct global points of view.

Once the content was collected, Dr. Andiñach would send each article to expert members of the Committee Board, according to the topic and their area of expertise. After reviewing, faculty would determine if articles were not solid, suitable, or they would offer revisions. The review process was a very active one.

Out of the approximately twenty articles that were included in each issue, twelve to fourteen typically came from established scholars in the field, but the Committee Board always reserved the remaining spots for content from new scholars.

When the publication was first beginning in the 1970s, the publication cycle for Cuadernos de teología was four issues per year. Upon Dr. Andiñach’s arrival in 1996, journal leadership decided to switch to two issues per year. With the advent of the new millennium, a final switch was made to publishing one extremely robust issue per year, which involved one journal with 450 pages and 25 articles.

As is the case with many journals, the final switch was made due to financial issues. Eventually, the costs associated with mailing each issue to subscribers became more expensive than producing and printing the issue itself.

In 2015, ISEDET was closed due to an institutional financial crisis. Unfortunately, Cuadernos de teología was feeling these financial constraints a few years prior. Fortunately, Dr. Andiñach, as a well-established scholar and leader in the field, had twenty years’ worth of professional connections to call upon. A frequent attendee of the Society of Biblical Literature’s Annual Meeting, on one such occasion, Dr. Andiñach met Atla’s Executive Director at the time, Dr. Dennis A. Norlin, and struck up a conversation. He decided it would be beneficial for the journal to be included in Atla’s suite of research tools as the first Spanish-language journal in AtlaSerials® (Atlas®).

He decided it would be beneficial for the journal to be included in Atla’s suite of research tools as the first Spanish-language journal in AtlaSerials® (Atlas®).

In the Latin American scholarly community, specifically in Argentina, Cuadernos de teología was known as top quality. The Ministry of Education in Argentina qualifies academic journals — Cuadernos was determined as Level One.

During the more than forty-year life of Cuadernos de teología, the scholarship included was published by authors who were well-known theologians throughout Latin America, the US, and Europe; the content was indexed in Latin Index and other various indexes around the world; it produced high-quality, lasting scholarship that supported and reflected its strong institutional partnership with ISEDET.

In the words of Dr. Andiñach, “People waited with bated breath for each issue.”

How Atla Can Help

A major challenge facing ceased publications and closed institutions is how to continue access to the community and its scholarship. Enduring access to journals is not always an easy task. This is one way that Atla works hard to support the scholarly community — by providing a platform to help preserve significant scholarly publications and allow their work to reach new and existing audiences. If you know of a ceased journal that should be added to Atla’s indexing and full-text research tools, please submit it here.

This post is an ongoing series highlighting ceased journals that have an enduring scholarly legacy. Learn more about the work Atla is doing to include these titles in our research tools.

‘Daughters of Sarah’: Paving the Way for Christian Feminist Theology

Learn about 'Daughters of Sarah,' a mid-20th century American journal for Christian feminists. Their legacy is preserved in AtlaSerials®.
Post

Learn all about the ceased journal New Theology Review, which filled an important gap in Catholic scholarship for over three decades.