‘Daughters of Sarah’: Paving the Way for Christian Feminist Theology 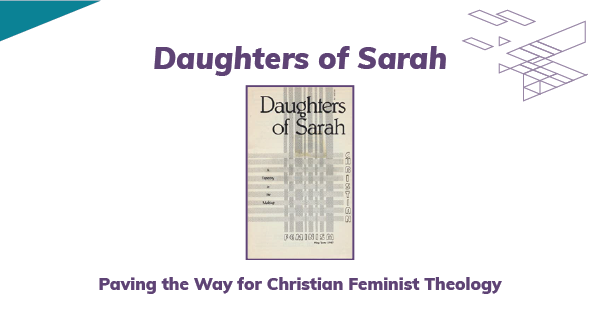 In the early 1970s, a group of six evangelical women in Chicago began meeting. Their topic of conversation? The emerging secular movement of feminism and what it might mean in a Christian context. These discussions would eventually lead to the Daughters of Sarah, a mid-20th century American journal for the particular audience of Christian feminists. Daughters of Sarah published some of the earliest religious scholarship on the topic.

This Women’s History Month, Atla Product Specialist Cristina Ochoa wants to highlight Daughters of Sarah — a journal full of moxie that helped pave the way for modern Christian feminist theology. Read on to learn more from her conversation with Dr. Lareta Halteman Finger (Reta), former Editor of Daughters of Sarah.

The women in the early discussion group asked questions such as, “What does feminism say to the church? How does the concept of women’s equality relate to a Christian/biblical perspective? What are the implications for women in churches today?”

Soon after that, Reta Finger, eventual Editor of Daughters of Sarah, saw an ad for the newsletter in a Christian social justice magazine, The Other Side. She immediately subscribed, all the while wondering, “Why Sarah?”

Sure enough, the first issue Finger received was without a cover page or image; the first article on the front page was entitled “Why Sarah?”

Around the same time, a new Christian women’s organization was also forming, calling itself the Evangelical Women’s Caucus. In 1975, it held its first national conference in Washington, D.C. Reta Finger attended and there met Lucille Sider, Editor of the emerging Daughters of Sarah.

While meeting, Sider told Finger that if she ever moved to Chicago, she should attend their journal meetings. Not long after, Finger did move, quickly attended her first meeting, and was there named Book Review Editor… then Copy Editor… and eventually Editor.

In the evangelical context of the 1960/’70s, much of women’s religious literature focused on “the perfect wife.” Men were assumed the leaders, and the idea of equality was not emphasized in marriage, work, or the church.

Meanwhile, in the secular world, leaders in the women’s movement were working to pave the way for change in all areas where women were concerned, which is to say, everywhere. In Finger’s words, “Gloria Steinem, Bella Abzug — these were original women who stuck their neck out. They were movers and shakers.”

The task of Daughters of Sarah was to raise the questions surrounding this reality and work to integrate ideas of gender equality with the biblical message of equal inclusion for all.

In Finger’s words, 'Gloria Steinem, Bella Abzug — these were original women who stuck their neck out. They were movers and shakers.'

That first article, “Why Sarah?” was written by Dr. Nancy Hardesty, one of the pioneers of the Evangelical Women’s Caucus. The same question, “Why Sarah?” that Reta Finger had asked herself years ago, held its answer in the biblical relationship of Abraham and Sarah.

In the founding members’ perspective, Sarah, rather than Abraham, calls the shots in the relationship. Sarah is the one who suggests Abraham conceive a child with Hagar, and once Hagar births Ishmael, Sarah becomes resentful of Hagar, causing Abraham to accede to Sarah’s requests.

At first, the primary focus of Daughters of Sarah was the issue of gender, as all of the founding members were white women. After the journal and its leaders began to develop, they realized that other lenses such as race and class issues should be applied to their discussions as well. In Reta Finger’s words, “We had to give Hagar her rights as well!”

The early issues of Daughters of Sarah reflect a more evangelical perspective, including a more literal interpretation of scripture. Gradually, the journal widened its audience to attract women and readers from a variety of churches: Catholic, Black, Mainline Christian, Anabaptist, Charismatic, and Seventh-Day Adventist churches. The journal’s team tried to be very biblical while being inclusive both in their theology and group membership.

Daughters of Sarah was a contemporary, lived Christian feminist journal dealing with scripture and social justice issues. The individuals involved promoted a spirit of equality and collectivity. With a strong dislike of hierarchy, oppression, inequality, and exclusion, liberation theology was the guiding principle of the journal, its scholarship, and its community.

In 1996, the journal ceased publication. For nearly three decades, it had produced groundbreaking, accessible scholarship in a newly burgeoning field. All those involved did not come to the project expecting to make money. They came because they had a commitment to the cause.

We were the kind of women who came because we wanted to be there, because we had an important message to give to the church.

Eventually, as founding leaders moved on, individuals were hired who were not driven by the same level of commitment the original members had.

It felt like a death when some of the core people left. At that time, we learned how necessary a deep commitment to the mission of an organization is, in terms of the flourishing and future of that organization.

Despite the official ceasing of publication, the legacy of Daughters of Sarah continues.

We completed what we set out to do. We publicized a new way of thinking in the church as a whole. We were part of the whole Christian feminist movement that I think helped a lot in waking up some of the church. At the very least, we aroused a lot of reaction against it!

Learn all about the ceased journal New Theology Review, which filled an important gap in Catholic scholarship for over three decades.
Post

Sisters Today was the longest-running chronicle of women’s consecrated religious life in North America. Their legacy is preserved in Atla Religion Database and Atlas PLUS.