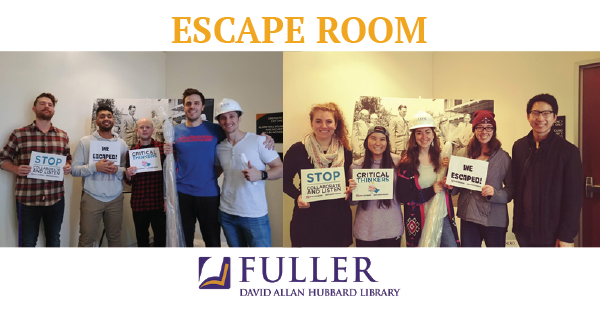 Why an Escape Room?

Escape Rooms are a group activity where a team of participants are locked in a room and must solve puzzles and mysteries around a narrative theme in order to ‘escape’ within a limited amount of time. The David Allan Hubbard Library says, “The popularity of escape rooms are due to a combination of things: collaboration, team building, communication, and problem-solving.” In order to engage with the community and foster these qualities, the grant team created, built, and implemented a Fuller–themed escape room. The David Allan Hubbard Library is, “exercising creativity and inventive ways to make the Library relevant and welcoming to its patrons.”

How did they do it?

The DAH Library used the office next to its Rare Books Room, which was empty. This allowed the participants a chance to see the Rare Books Room and learn about some of the items housed there. The objective of the escape room was to retrieve a groundbreaking shovel that was used to build the DAH Library. “Coming up with the puzzles was the most difficult part,” said the DAH Library. Since the campus has three schools (Theology, Intercultural Studies, and Psychology), the team incorporated references to each. The Reference Librarians were the first test group, and the puzzles improved with their feedback.

They also planted more red herrings and came up with a set of rules for the participants. These rules reassured them that the room was not scary (nothing was going to jump out at them), and gave a few helpful hints. After one more round of test groups, the escape room was ready for the patrons to give it a try.

What did people think?

The participants love it! The first official group tried out the room on February 8, 2019, and managed to escape in seventeen minutes. The quickest time so far (after eight teams have gone through) is nine minutes and fifty seconds. “Overall, the escape room has been well received and a great topic of discussion,” says the DAH Library. According to feedback forms, patrons thought it was a fun experience and wanted it to be longer.

After the huge success of the first one, the DAH Library has, “decided to use the remaining funds to craft an entirely new escape room with a new narrative. We hope to have the new puzzles and story ready to go for Summer 2019.” Congratulations to the David Allan Hubbard Library for creating such an engaging and fun experience for their patrons!

Atla Library Impact Grants are available annually to institutional members for up to $1,000, for the purposes of raising awareness of the importance of theological libraries and serving the communities that Atla represents.

Graduate Theological Union (GTU) is the newest contributor to the Atla Digital Library. Check out their collection of 433 items.
Post

Notes from the Road: Member Visits in San Diego, California

Early April found me in San Diego, California, enjoying the company of other librarians in yet another hotel ballroom at…