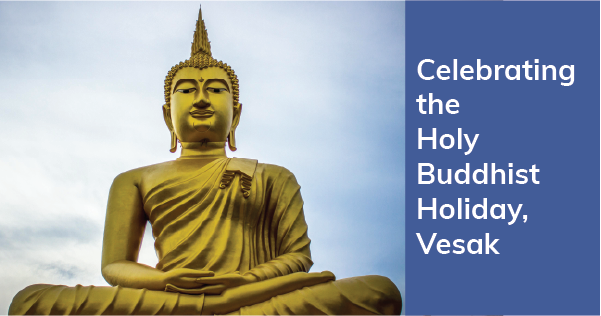 Religious holidays and festivals of Eastern traditions are rarely represented in popular culture or in society as a whole.

The Buddhist calendar year begins on what is generally known as “Chinese New Year.” In the first several months of the Buddhist year, several minor holidays occur, often on differing days depending on Buddhist school and/or regional/cultural tradition.

On the full moon (15th day) of the fourth month,1 Buddhists around the world celebrate the holiest of days, a celebration that is held by every tradition – the celebration of Vesak. Also known as Wesak, Buddha Purnima, Buddha Jayanti, and Saga Dawa Duchen, Vesak is the combined celebration of the birth, enlightenment, and parinirvana (death) of the founder of Buddhism, Siddhartha Gautama.2 Similar to the Christian holidays of Christmas and Easter rolled into one, Vesak is both a celebration and a remembrance of a great teacher. It is a time to come together as a community in happiness, as well as a time to reconnect with our traditions of disciplined meditation.

... Vesak is the combined celebration of the birth, enlightenment, and parinirvana (death) of the founder of Buddhism, Siddhartha Gautama.

There are little to no extensive resources for information on the holiday: what can be found online is limited primarily to short news articles coming from countries and traditions that celebrate. Even encyclopedias either relegate the holiday to “Buddhist festivals” or offer less than 1,000 words. For this reason, I will very briefly discuss the holiday practice from my own tradition of Tibetan Buddhism.

Vesak in the Tibetan Tradition

On Vesak, known as Saga Dawa Duchen in the Tibetan Tradition, Vajrayana (Tantric) Buddhists gather together for practice. On this day, we recommit ourselves to the Three Jewels: the Buddha, Dharma, and Sangha each in its own way. For the Buddha, we practice. As tantric practitioners, we specifically practice chanted texts with visualization focusing on Buddha Shakyamuni himself – this is similar to a combination of prayer and hymn. The texts in my own tradition are “The Praise of the Twelve Acts of the Buddha” and “The Shower of Blessings.”3 While these specific practices are unique to the Tibetan tradition, similar practices and texts can be found throughout all Buddhist traditions. Afterward, we focus on the dharma through study, usually through a lecture from a Lama or other teacher. Finally, for the sangha we both make offerings to our monastic communities and commit, for a single day, to hold the eight vows of the lay renunciate (though many of us hold five throughout our lives).4 We also look to the larger sangha, the community of all Buddhists, and make offerings to all those in need, often in the form of money, food, or a specific commitment to care for those in need. In doing all of these, we take the time to see the importance of this life as a place to focus on what the Buddha taught: the wisdom of meditation and self-reflection, the discipline of our commitments and vows, and the commitment of care and compassion as we guide others along the path to enlightenment.

Asgar, Wendy Biddlecome. “The Buddhist Christmas: How the Buddha’s Birthday Was Pumped Up To Compete With Christianity.” Tricycle. Summer (2020). https://tricycle.org/magazine/buddhist-christmas-vesak/

1 Since this date is calculated differently, it is common for some countries to celebrate on slightly differing days, particularly if the month (usually April or May) has two full moons.

2 The holiday is celebrated as all three in the Theravada and Tibetan traditions. East Asian traditions (in Japan, China, and Korea) celebrate the day only as the birth of the Buddha and hold a separate observance and celebration for the Buddha’s enlightenment.

Join us in celebrating Asian Pacific American Heritage Month (APAHM) during May and learn more about Asian American and Pacific Islanders in theological librarianship.