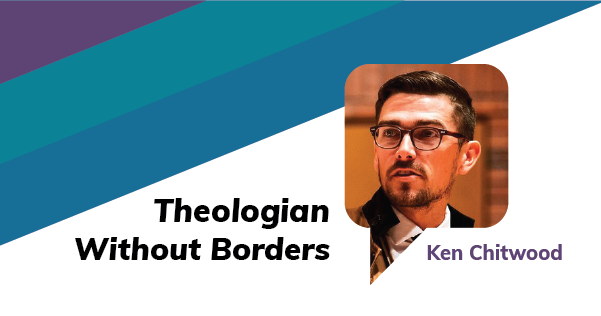 Featured prominently on the About page of Ken Chitwood’s website is the word “vocatio.”

What is vocatio? Vocatio is Latin for “vocation” or “calling.” Ken feels called to the work of religious literacy. For him it is more than work, it is an effort with spiritual promptings & divine intimations.

Atla Product Specialist Cristina Ochoa recently spoke with Ken Chitwood about his tripartite work as a religion scholar, a journalist, and a pastor. Ken Chitwood is a religion scholar currently working as the Fritz Thyssen Foundation Postdoctoral Research Fellow at the Berlin Graduate School Muslim Cultures & Societies at Freie Universität Berlin. He is also a journalist-fellow with the University of Southern California’s Center for Religion and Civic Culture’s Spiritual Exemplars Project.

Read on to learn more about their conversation.

CO: Tell me a little about yourself — your personal and academic backgrounds, the work that you do.

KC: Three professions that I practice are the academic study of religion, the journalistic exploration of religion, and pastoral work and training. They all interrelate with one another in some way.

CO: This is such a diverse, yet a complementary body of work. How did this all start?

KC: It all started for me as a young guy in Los Angeles raised in a Christian household, who wanted to enter into the study of theology as an undergraduate student. I couldn’t help but be fascinated and intrigued by my cultural surroundings in LA. The diversity of personal relationships I had allowed me to see theology both in the more narrow Christian context I was being raised in and a truly diverse context. As I gained more life experience, I came to appreciate more and more that the world is defined by a constant flow of people, ideas, technology, and religion…we are all dealing with diversity every day. We have to figure out how to navigate it. It’s in our neighborhoods, our families, our businesses, on our phones. I wanted to explore that academically, but also have a very public exploration and engagement with that.

As I gained more life experience, I came to appreciate more and more that the world is defined by a constant flow of people, ideas, technology, and religion…we are all dealing with diversity every day.

CO: That makes sense. How do you feel journalism contributes to that work?

KC: The journalism I do contributes to the understanding of religious diversity around the world (though it started in a US context). As an ordained pastor and theologian, I am very concerned with how Christians address the issue of diversity and difference. I use my academic and journalistic encounters to inform my work in this regard. I also seek to honor the diverse stories that I encounter both within, and beyond, my own tradition.

CO: I want to ask you about the word “vocatio,” which is on your website a few times. What does that word mean to you, and how has it guided your work?

In my opinion, you can be a cobbler, a baker, a candlestick maker — and that can be a holy calling.

As I started to place my efforts more toward religious literacy, people were confused about how that fit into my work as a pastor and theologian. I saw religious literacy as my calling, and a holy one at that. For Christians, we need to better understand religions and how Christian pre-suppositions have affected our perspectives so that we can have better encounters with those traditions. I remember early on in my work with religious literacy, someone said to me, “Ken, you’re in danger of being known as the ‘Islam guy’ within the Church.” And I was happy about that. This [religious literacy work] is not different than or separate from my religious calling, my theological work. It is the basis of that work. I’m going to keep on doing it because I think it is so terribly important.

One of my favorite quotes on this subject comes from the words of Max Müller, “The person who knows only one religion, knows none.”

CO: On your academic journey as a religion scholar, what led you to your areas of study?

KC: In Houston, where I was working on my MA in Theology and Culture at Concordia University Irvine, I was taking groups of Christians on “Houston World Tours,” which were essentially tours down this one road in Houston with several houses of worship. It provided the opportunity for interreligious interaction and religious literacy. When I brought the group into a mosque, I saw a man and assumed he was Arab. When I approached him, he immediately started speaking to me in Spanish and ended up being from El Salvador.

This happened almost ten years ago, and now, a decade later, this experience has significantly shaped my life. Because of the experiences I had while pursuing my MA, I published a profile with the Houston Chronicle that turned into my master’s thesis on the Latinx Muslim community.

CO: Yes, that’s how I came across your work. I am Puerto Rican, and I saw that you have done a lot of research on Puerto Rican Muslims.

KC: Yes, in deciding to conduct research with the Latinx Muslim community, I noted that Puerto Ricans are a significant portion of that demographic. I decided to use the Puerto Rican case as a lens through which to look at Muslims in the Americas, as well as in a broader context. I see Puerto Rican Muslims as quadruple minorities – Puerto Rican among Muslims, Muslim among Puerto Ricans, and both Puerto Rican and Muslim in the context of the American empire. I wanted to not only understand how they navigate that type of minority discrimination for my research, but also so that I could critique my own community in our behavior toward religious minorities; and how white Christian people have gone about being a privileged sector in the US more broadly.

These topics continue to be the bulk of my academic writing today.

CO: What I find so fascinating about all the work you do is how it is all interwoven and has provided you and others with a broader perspective of the world in all aspects: religion, politics, race…

KC: Definitely. Honestly, 9/11 was also a turning point for me in terms of the work I do now because I came from a conservative household. Once 9/11 happened, my Muslim friends suddenly became “Muslim.” The world had given them these labels that hadn’t been present in my relationships with them before that point. At first, I started to parrot the conservative lines that were circulating, but that didn’t jive with what I was seeing and experiencing in my social life.

I remember the leadership at a local church had scheduled an imam to come to speak before 9/11. Thankfully, the imam still came and spoke, but I remember him saying to me after, “I need you to talk to your own people. They should be having their own grappling, encounters, and difficulties and take responsibility for how they have contributed to this discriminatory culture.”

That really affected me and cemented the fact that we need to understand religion in all of its diversity, in all traditions, and think about the responsibility we have in contributing to the culture and dialogue surrounding religion.

CO: I completely agree. That work can be very difficult, but necessary.

KC: Yes, more recently I’ve been partnering with groups like Lutherans for Racial Justice, which formed in and around the Black Lives Matter movement spike in 2020. The fact of the matter is we have contributed to racism in systemic and structural ways by which we have barred people from racial and ethnic backgrounds from joining our community [the Lutheran community]. It is very telling that Lutheran denominations are 95-96% white in the US.

That’s why I am exploring the intersection of race and religion. We have conflated the two, and our views on religion are very tied to our racist views as well.

CO: Of course, your global experiences have contributed to and continue to support the work that you do. What other resources do you use for your academic and pastoral work?

KC: I actually use Atla research tools a lot! The first interaction I ever had with Atla research tools was writing research papers, often encountering articles and resources and data that were very important for my personal entrée into the field, and that continues today.

Atla is the bread and butter of databases out there. It allows scholars to plug into a broader conversation that stretches back historically and includes the contemporary conversation. It provides you with the building blocks of research that you need to be engaged with, the tools that let you do the research, contextualize, form, and create your own conclusions when you come back in from the field. This is always a database I lead people (pastors, students, etc.) to so that they are able to lay the groundwork, do their own research, and explore their own themes. And, all credit goes to my professors at my undergraduate universities who told me that Atla is where you start.

Atla is the bread and butter of databases out there. It allows scholars to plug into a broader conversation that stretches back historically and includes the contemporary conversation.

I also want to mention that lately, I’ve been using Atla’s Research in Ministry® (RIM®) during my pastoral work, though my ethnographic research, theology, and ecclesiology have been influenced by the resource as well.

CO: We are so glad to know that Atla research tools have been beneficial to your very diverse work! Last question for you today — What has been the most unexpected discovery you have made during all your work?

KC: There have been so many discoveries along the way, things that were not new to the world, but new to me. I can’t help but just be overwhelmed by the many quotidian experiences that my calling has allowed me to be a part of, that have been so humbling. The tables I’ve sat around, the experiences I’ve been a part of…they lay me pretty flat when I think about them.

It just reminds you of your humanity, in all its messiness and wonder.

In the words of Mahatma Gandhi, “The friendly study of the world’s religions is a most sacred duty.”

You can learn more about Ken Chitwood here. You can also read more of his work on his blog. Stay tuned for his new book The Muslims of Latin America and the Caribbean set to be released in September 2021.

Announcing Additions to Atla Products – May 2021

Atla is pleased to announce the addition of titles now available in the Atla Religion Database® (Atla RDB®), AtlaSerials® (Atlas®), and AtlaSerials PLUS® (Atlas PLUS®).
Post

Enriching the Landscape: How Religion for Breakfast Has Reached New Corners of the Religious Studies Audience

Meet Andrew Mark Henry, founder of the widely known YouTube channel Religion for Breakfast, and read the story behind this Religious Studies Resource.