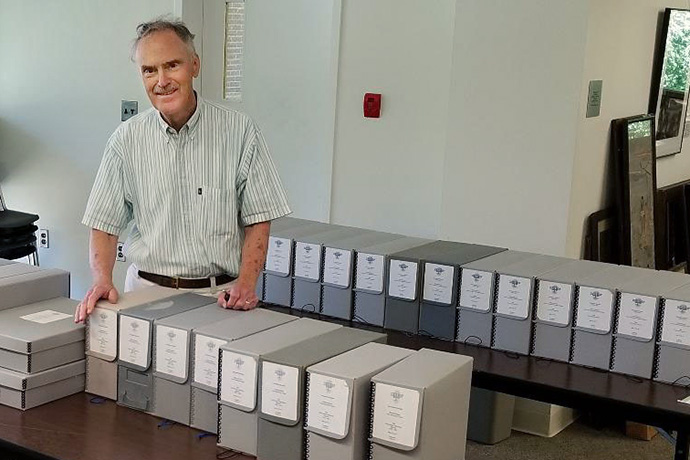 We are saddened to share the news of the passing of Atla Emeritus Member Kenneth E. Rowe, Methodist librarian and leading scholar. Please read a message from Andrew D. Scrimgeour and John G. McEllhenney on his passing below.

Professor Rowe’s middle name might well have been Wesley after John Wesley, founder of Methodism. Fully captured by and committed to his religious tradition, Rowe devoted his career to documenting and writing about the landscape of Methodism in America. Upon completing ministerial studies at Yale Divinity School (BD, 1962), he was ordained a Methodist pastor in the Eastern Pennsylvania Conference. After three years as a pastor and campus minister, he craved the time, skills, and credentials to delve more deeply into the history of his denomination. To that end, he pursued a doctorate in American religious history at Drew University (PhD, 1969) and a master’s of library science (MLS, Rutgers University, 1970). With those twin credentials, he won a joint appointment at Drew: professor of American religious history in the Theological School and Methodist Librarian in the University Library. He held these positions until his retirement thirty-four years later.

Prodigious in research, Rowe wrote or co-wrote fourteen books, edited or co-edited seven books, wrote thirty-six essays and articles, and established and edited four scholarly series. Known for clear, incisive writing, his extensive publications on American Methodism culminated in two volumes, co-written with Russell E. Richey and Jean Miller Schmidt, that became the leading textbooks for the field: The Methodist Experience in America: A History (2010) and its companion, Sourcebook (2000).

Perhaps his landmark achievement was persuading the president of Drew University and the university librarian to join forces with him to compete with other universities to provide a new home for the national archives of the United Methodist Church on the Drew campus. At the heart of their proposal was building a state-of-the-art archive, complete with underground vaults. Their bid won. When combined with Drew’s considerable holdings and the special collections that Rowe solicited from donors, Drew became one of three great centers for the study of Methodism in the world. Rowe liked to call it “the church’s attic.” Hundreds of dissertations, books, and articles have their origins in these collections. The conference room of the Center bears Rowe’s name.

The genius of Rowe’s perspective on Methodism was the view from the pew, not the view from the church’s hierarchy. As Russell Richey put it: “Rowe called our attention to the importance of our everyday lives as church members — to Sunday schools, popular hymns, church architecture, women’s organizations, caucuses, protest movements, and worship.” He was also the unofficial archivist for the Gay movements in the United Methodist Church.

In retirement, Rowe continued to write and increasingly found time to participate in regional antique car events, proudly driving his prized 1964 forest green, white roofed, Chrysler Imperial convertible. Singing in his church choir and gardening as a volunteer at the Tryon Palace in New Bern gave him much pleasure.

Rowe died October 8, 2021, at the CarolinaEast Medical Center near his home in New Bern, North Carolina. He was 84.

Donations in his honor may be made to: Drew University, 36 Madison Avenue, Madison, New Jersey 07940.

It is with great sadness that we share the news Paul D. Meyer, President and Co-CEO of Tecker International, and a longtime consultant to Atla, passed away in early September.
Post

During Atla Annual 2021 Online, we took a moment to remember the legacies and achievements of Phil Johnson and Bill Henderson.