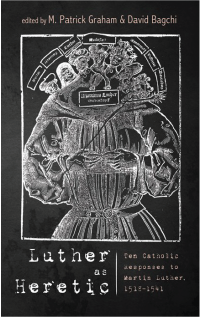 Longtime Atla member M. Patrick Graham has released a new book in collaboration with David Bagchi, Luther as Heretic: Ten Catholic Responses to Martin Luther, 1518-1541. When Martin Luther published his Ninety-Five Theses, it began a debate that continued for centuries. Although Luther’s writings and those of his followers are available in English translation, the writings of most of his Catholic opponents are not. This book aims to change that by collecting and translating ten responses to the Ninety-Five Theses from Luther’s Catholic contemporaries.

Pat Graham has been working on this volume since 2015. He utilized the resources of the Kessler Reformation Collection at the Pitts Theology Library, of which he was Library Director at the time. About the project, Pat said,

It was a four-year labor of love. The Halle Foundation in Atlanta provided generous support, and the translators did fine work (among whom was Atla member Armin Siedlecki).

Pat worked on the book with preeminent scholar David Bagchi of the University of Hull. Of his coeditor, Pat commented, “One of the world’s foremost experts on Catholic responses to Luther. It was such an honor to work with this fine scholar!” In the preface of the book, the two editors explain that,

Our hope is that this collection of translations will prove useful for teaching and research and foster a deeper understanding of the sixteenth-century debates by allowing readers today to hear the voices that have been largely silent for the English speaking world for centuries.

Luther as Heretic: Ten Catholic Responses to Martin Luther, 1518-1541 was published by Pickwick Publications in August of 2019. Pickwick Publications is an imprint of Wipf and Stock Publishers. You can read more about the book and purchase it on their website. M. Patrick Graham is the Margaret A. Pitts Professor Emeritus of Theological Bibliography at the Candler School of Theology at Emory University, and coeditor of The Hebrew Bible Today (1998) and Philipp Melanchthon (1497–1560) and the Commentary (1997). He has been a member of Atla since 1989.

Please join us in congratulating Pat on his achievement!

What does it mean to be a Christian librarian? The new book edited by Atla Member Garrett Trott, "The Faithful Librarian," aims to answer that question.