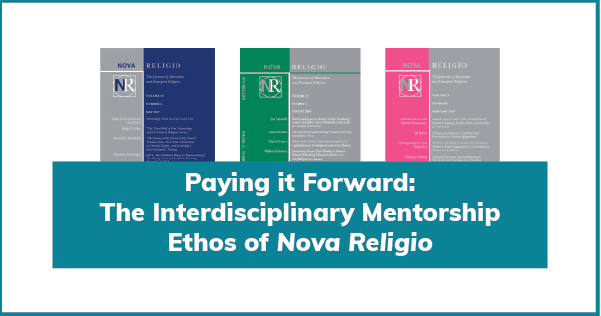 Starting as an author for the journal, co-general editor Dr. Ben Zeller has played an active role during the lifetime of Nova Religio, being both a mentee and mentor, contributor and editor, follower and leader, cheerleader and champion. A leader in its field, Nova Religio is the marquee journal in new religious movements, making substantial strides over the past twenty-five years to solidify the field and cultivate and include new scholars and scholarship.

The wave of new religious movement studies began in the 1970s in the vein of a strong American counterculture movement. Like other religious movements, such as the Hare Krishna movement (ISKCON) and Scientology (which were typically referred to as cults), much of the scholarship being produced on new religious movements was originally published in journals under the category of sociology. At the time, this didn’t necessarily allow for more qualitative methodologies.

During the 1990s, serious debates began surrounding how to define the term “new religious movements.” New religions scholars who weren’t all within the field of sociology were searching for a publication venue within the broad scope of religion to publish their scholarship. The intent was to look at the broader reach of new religion trends, social trends, and organizations; not exclusive to religious movements or cults, but inclusive of new and alternative trends within the context of global religiosity. Nearing the end of the decade, century, and millennium, in the midst of the end the world groups, it was clear that interest in the study of these groups was brimming and there was a hole that needed to be filled in this area of research. Scholars and scholarship for this growing new field were needed. In 1997, in an attempt to solidify the field, Nova Religio was born.

The name of the journal was chosen to intentionally include both historical new religions as well as contemporary ones. Naming this particular field of study has always been a contentious issue, especially since it has typically involved cults, though no member of a cult would actually describe their membership or allegiance in that way. In opposition to the field of cultic studies that permits normative views, the field of new religious movements that Nova Religio inhabits doesn’t take a stand on the legitimacy of the groups and ideas they study. As scholars, the Nova Religio team deemed from the beginning that it was not their place to judge whose religion is sane, good, or otherwise.

Both the journal, Nova Religio, and the associated AAR Program Unit where conference meetings are held bolster and unify the field of new religious movements. Mutual support helps them work together in concert, providing opportunities for all scholars to participate in studying topics that are often considered weird even by other scholars. Almost no scholars, especially during the field’s inception in the ‘90s, are trained with new religious movements as a specialty, ensuring all scholars that become involved truly do so out of earnest interest.

Since Nova Religio is so closely linked with the AAR Program unit, a substantial portion of the journal’s content is sourced from conference papers. The team of co-general editors that manage Nova Religio do their best to attend all sessions associated with the new religions group at the AAR/SBL annual conference. Additionally, EuARe (European Academy of Religion) and CESNUR (Center for Studies on New Religions), provide opportunities to find new content. More than anything, content is collected by word of mouth from within the network of new and established new religions scholars.

Many scholars come to the journal from other academic fields, so the review team at Nova Religio work to be very gracious with submitting authors. Once content is submitted to the peer review team, it is assessed and approved by consensus. Phillip Lucas, the original founder of Nova Religio, along with Catherine Wessinger, quickly settled on the shared title of “co-general editor,” planting egalitarian and consensus-driven roots, along with a small editorial board.

During the review process, the co-general editors also review the articles, but generally defer to peer reviewers. If a co-general editor has expertise in a particular subject area that an article is written on, then they are also included as an additional reviewer. If the piece submitted is written on an interdisciplinary topic, a third reviewer with expertise in the subject area will often be included as well. As a last complementary component, one or two co-general editors will typically read the piece and provide a full report. This report along with all edits and feedback from the peer reviewers are collected and sent to the author together.

Above all else, the Nova Religio team values providing a robust review for every author that submits content, regardless of whether the piece is accepted for inclusion or not. In fact, the Nova Religio team of peer reviewers and editors have seen several articles they’ve passed on that were later published in other journals. The ultimate goal is to try to mentor scholars in the field, so they have a positive learning experience with the journal. Paying it forward to authors to help support and improve their scholarship, writing, analysis…that’s the ethos of Nova Religio.

I think we’re really proud of the care we take in the production of the journal. We are careful editors because it’s a contentious topic. We want to make sure that every article has been carefully reviewed, representing the best, most accurate scholarship it can be and is presented in the most successful way it can be to a wide set of scholars. We are aware that sometimes readers come to us through other channels, like the Atla research databases or through another subfield.

Proud to publish with a nonprofit publisher, Nova Religio’s partnership with the University of California Press has immensely benefitted the journal. Uniquely, the journal was initially owned by the co-general editors, and then passed to AASNR (Association for the Academic Studies of New Religions), whose board is comprised of the editors and an advisory committee. They serve as the legal entity owning and sponsoring the journal.

Maybe it’s not unique about our journal, but it’s special about our journal — ours is the oldest and it’s the best respected, marquee journal that helps hold the field of new religions together.

As the founding generation of new religions scholars advance in the field, Nova Religio is looking to the future to bring in new leaders and generate new scholars.

You can access all full-text issues of Nova Religio in AtlaSerials® (Atlas®) and AtlaSerials PLUS® (Atlas PLUS®). The journal also recently started a YouTube channel where they post interviews with their new religions scholars.

Sisters Today was the longest-running chronicle of women’s consecrated religious life in North America. Their legacy is preserved in Atla Religion Database and Atlas PLUS.
Post