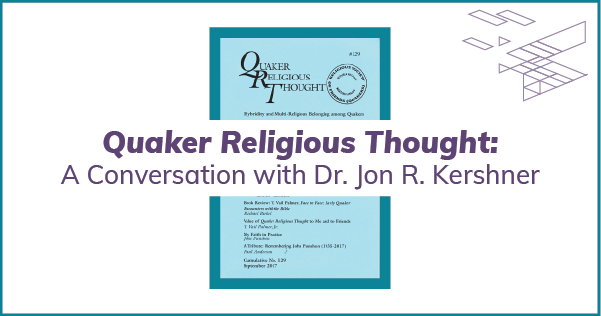 This is the first in an ongoing series highlighting new and notable titles included within Atla’s research tools.

Quaker Religious Thought has been in publication since 1959, but last year the journal was facing challenges of how to replenish dwindling subscriptions and diminishing financial resources. University of Lancaster’s Jon R. Kershner along with a group of younger scholars decided to take the journal up and work to revitalize it. The full-text of Quaker Religious Thought is now live in AtlaSerials PLUS® (Atlas PLUS®).

CO: What inspired you to revitalize Quaker Religious Thought?

JRK: As of last year, Quaker Religious Thought was a small and not a very visible journal. It had been doing really good work, publishing since 1959, and currently producing Issue #135 — but QRT started off with a very small constituency and didn’t really take the steps to expand the constituency or to adopt to new standards and models that journals have been following. Of course, throughout the life cycle of QRT, it has been important for young scholars that the work they contribute is visible and recognized as peer-reviewed. Nowadays, it is mandatory that scholars have work indexed somewhere, not just recognized by word-of-mouth as peer-reviewed, but actually published in that way.

Over the past few years, I had been having conversations with several young scholars who felt that the articles they contributed to the journal would go there to die because there was little avenue for immediate dissemination of their work. As a Quaker, I saw revitalizing QRT as an act of service to provide these scholars with formal metrics, platforms, and avenues to ensure their work is visible and adheres to current standards.

So I approached Megan McCarthy [Atla Digital Content Production Manager] and Gregg Taylor [Atla Licensing Manager] about what Atla could offer us and whether QRT would be a good fit for Atla. After speaking to several other publishing organizations, I decided Atla seemed like the best fit.

CO: What made you feel like Atla was the best fit for the journal?

JRK: As a practicing Quaker and scholar of Quakerism, I’m interested in the confessional nature of Quaker thought and how it can enliven religious tradition, as well as reflect in a scholarly way on the tradition itself. Atla provides really helpful resources for that type of reflection. Also, thinking about all the places where Atla is present helped convince me. QRT has an international readership and editorial committee. Atla has a global reach and is flexible about the types of journals it includes, hosting both indexed materials and a digital platform for full-text journals — exactly what we were looking for. The Atla team gave me all the steps that I needed to take to give QRT more visibility than it had before.

Atla has a global reach and is flexible about the types of journals it includes, hosting both indexed materials and a digital platform for full-text journals — exactly what we were looking for.

CO: How did Quaker Religious Thought come to be?

JRK: In 1958, the Quaker Theological Discussion Group established itself as a group seeking to share scholarship across Quaker traditions, bridging several major factions that had formed as a result of several ideological splits over several centuries. QRT became the journal publishing arm of the organization. In the 1950s, there was an ecumenical spirit within the Quaker community, as Quakers were recovering from some of these splits and wanting to interact and share with other Quaker groups. A group of Quaker scholars from what is now George Fox University, Wilmington College, and Earlham College decided to form a conference meeting where they could share their understandings of the Quaker faith and how the Quaker tradition spoke to the issues of the world around them. From this annual meeting, papers were selected for publication in QRT.

CO: What does Quaker Religious Thought need to continue to do to adapt to the future?

JRK: Looking to the future, if we remained a boutique journal, we would be downplaying and undermining the good work that is happening within the journal. Long-term, we need to continue to pursue the relationships (like with Atla) that will recognize the work being done and help expand our potential readership. Our previous 60 years of publishing has inspired QRT to be available outside of the small world of Quaker religious studies. If QRT would not have made the changes we have, it would only have become more and more difficult to solicit the types of articles we wanted to, and our readership would have drained more and more, and eventually, subscriptions would have followed suit.

In addition to partnering with Atla, we’ve revitalized our social media and internet presence thanks to some incredible work by our Web and Social Media Editors. Now people can order issues and make subscriptions online, rather than sending in a physical check, which was still the case as of a year ago. The journal was 30 years behind the times in terms of its infrastructure, but not its scholarship. The scholarly work being done in QRT is relevant to other traditions and religious scholars outside of Quakerism. We needed to bridge that gap.

The journal was 30 years behind the times in terms of its infrastructure, but not its scholarship. The scholarly work being done in QRT is relevant to other traditions and religious scholars outside of Quakerism. We needed to bridge that gap.

CO: What is your role with Quaker Religious Thought?

JRK: I am the Editor for QRT, but I also started the Quaker Studies Program Unit at the American Academy of Religion, and currently serve as co-chair of the Program Unit. As Editor, I oversee the recruiting and acquisition of articles, copyediting, layout, and production; I make sure all articles conform to journal guidelines; I supervise the peer review process: public conference peer review and a single-blind peer review; I make sure all articles address any issues raised during the peer review process; I work with QRT’s social media editors; and I communicate with the editorial team (comprised of associate editors and an advisory council) to discuss the future of QRT.

CO: Wow, you do a lot. How do you work with your associate editors and advisory council?

JRK: My group of associate editors help me review content, give me advice on what direction the journal should take, and on occasion, they are active in producing content for the journal. The advisory council develops the long-term vision and goals. I often write up the pros and cons of major decisions and then go to both groups for guidance.

The leadership of QRT is based on the Quaker model of discernment: seeking to come to a common understanding together. We do this by bringing in all voices. Since the revitalization, we have increased the number and diversity of both the associate editors and the advisory council. We now have members from Britain, Canada, US, Kenya — and from a breadth of Quaker traditions: liberal, evangelical, conservative. We’ve been and will continue to do better intentionally to bring that diversity about.

CO: What institutional support does Quaker Religious Thought have?

JRK: All of our incoming funds come from subscriptions. We occasionally may get a grant or gift from our partner institutions (George Fox University, Earlham College). George Fox also provides us with server space to host back issues on Digital Commons. Honestly, we run a lean operation. Everyone associated with the journal is volunteer, so each year, we have to raise enough funds (through subscriptions) to pay the printing and mailing fees.

CO: What is the academic scope of Quaker Religious Thought? Does the journal have an intended audience outside of the academy?

JRK: We work to bridge the division and the gaps within the Quaker tradition through scholarship, and demonstrate how history has influenced the understanding of Quaker traditions. QRT is part of a strong, new vibrancy in Quaker studies. That ecumenical push that was alive in 1959 is still present in QRT issues. We include articles that address and discuss the breadth of Quakerism, which is a very international religion. We seek to be a place that regardless of where people are coming from (geographic, political), they have a meeting place and a platform for their voices. In doing that, in engaging in an ecumenical theological reflection, the work of QRT can be an important test case for other religions or theological perspectives in finding a way to approach the work of scholarship that is open to hearing disagreement. This intention of bridging divisions is very much within the mission statement of QRT.

CO: What can I not afford to exclude about Quaker Religious Thought?

JRK: QRT bridges the Quaker traditions. It is theologically inclusive. It includes multiple methodologies: history, theology, social sciences, and is very eclectic in the articles featured. Quakers are becoming more and more recognized as making positive contributions to religious thought outside of Quakerism around the world. Quakerism is being used as a test case. QRT is really one of only a few journals that take a very serious look at the Quaker tradition with the goal of expanding the relevance of Quakerism for Quakers to understand their own tradition, but also to understand the way Quakerism has impacted the religious field in general. That work of analyzing Quakerism is expanding its relevance to the study of religion in general, on a global scale.

We continue to expand our resources in Islamic studies, including geographic coverage, Islamic traditions, and academic philosophies. View a spotlight list of indexed and full-text titles.
Post

The 2019-2020 year was a busy year for our Atla products team. Learn about what we have been up to this year and what we have planned for the upcoming year!