Enriching the Landscape: How Religion for Breakfast Has Reached New Corners of the Religious Studies Audience 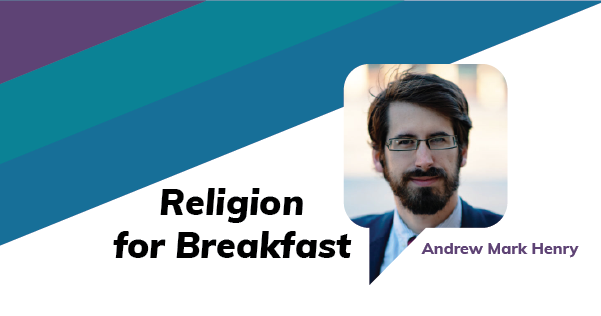 This post is part of a new series that highlights innovative thought leaders in religion and theology who have influenced or broadened the landscape, audience, or opportunities in the field.

Atla Product Specialist Cristina Ochoa recently spoke with the founder of the widely known YouTube channel Religion for Breakfast, Andrew Mark Henry, to learn more about his inspiration and initiative.

CO: Thank you so much for taking the time to speak with me, Andrew. I am a big fan of Religion for Breakfast. Why don’t you first walk me through your story?

AMH: Of course. So I recently completed my PhD program in Religious Studies at Boston University (BU).

AMH: Yes, thank you. After eight years, I am finally done. So, I have my PhD now in Religious Studies, with a focus on ancient Christianity, but I actually started out my education focusing on history and archeology.

CO: Interesting… so how did you get onto the religious studies track?

AMH: Well, as part of my history and archeology coursework, I had to take religious studies courses, and I ended up teaching a few world religions courses as well, which were way outside my wheelhouse. As I dove more into the subject matter, I found myself interested in exorcism and demonology, but really religion writ large. Once I got to the fourth year in my PhD program, I decided to start a blog, religionforbreakfast.com.

At the time, I was watching educational YouTube every day, so I felt I had a pulse on the feel, and I quickly decided to turn the blog into a YouTube channel, and after one year of thankless work, it sky-rocketed.

CO: Your academic journey, I think, resonates with a lot of people. Studying one subject, noticing areas of overlap, and discovering a new, deeper passion. What was your original vision for Religion for Breakfast?

AMH: I branded it as an educational channel that aims to promote religious literacy, particularly for people working on religion as an academic topic. I’m a firm believer that pursuing religious studies from purely an academic perspective is possible; your personal affiliations shouldn’t matter. You don’t have to be religious to study religion, and I think I’ve helped prove that.

CO: Is there a story behind the name?

AMH: Honestly, it’s completely random. I wanted it to be clever and disarming because religion evokes negative emotions for many people.

CO: How were you able to get Religion for Breakfast off the ground and sustain your content creation?

AMH: I had been a PhD student since 2012 until just this August, so I had been using the resources at Boston University afforded to me as a student through the library, and through a consortium of theology schools in the Boston area (Boston Theological Society, Harvard Divinity School) — but I’ll be honest, I was nervous about graduating. I kept wondering, “How do independent scholars make it work?” I ended up tweeting about it, and I almost immediately received an outpouring of support from faculty members at BU.

CO: That’s amazing! The power of the internet, huh?

AMH: Yes, definitely. One professor, in particular, Wesley Wildman got me set up with a postdoc fellowship with the Center for Mind & Culture at BU, where I’m studying social media and religious literacy. Once I’m able, I do have a postdoc set up with the American Research Center of Egypt, but until I’m able to travel, I have my position at BU.

CO: It’s great that you’ve been able to tap into your university’s support even after you graduated. I know that a lot of institutions work hard to provide continuing access to research tools and other resources, but it can be difficult.

AMH: For sure. What I’ve realized working on Religion for Breakfast is that a lot of YouTube content creators are scholars that are independent or adjunct faculty who don’t often have access to library materials, like the creators of Digital Hammurabi and the New Testament Review podcast. Some of the best work being done right now is not necessarily being done by the tenured professor, but by the grad student, adjunct faculty, independent or unaffiliated scholar, since they often have more freedom to do so.

CO: Do you feel that creating Religion for Breakfast gave you credit in the academic community?

AMH: That was a complicated decision for me to make. I was worried that creating for Religion for Breakfast might ruin my academic reputation, since it is meant for a broader audience and is on YouTube. As you know, peer-reviewed articles are the standard measure in academia, so I was worried that my scholarship and content would not come across as serious. Eventually, I realized the situation was kind of a do or die. If I don’t do it, I might not get tenure anyway.

CO: It seems like the decision has paid off so far. Would you agree?

AMH: Yeah, I would say so. A lot of professors use my materials in their syllabi, and frankly, now that I have my PhD, it’s like the union card. I have credibility in the more traditionally accepted academic way, and I have credibility with the more general public. I have over 180,000 subscribers on YouTube, and some of my videos have nearly 1 million views. I’ve also been able to reach a wide audience. My fanbase on YouTube is multireligious, mostly young (25-35 year-olds), and only 50% American.

CO: What are you currently working on?

AMH: I’m currently editing a video idea that I came up with last week. I work on some aspect of the channel every day, some ideas just pop up, others are tied to events or news pegs like holidays. Religion for Breakfast is technically a media company, so I do produce videos for other organizations, like the Religion Freedom Center. I’ve also done some advertising work with an online event company called Speakeasy, where I created a 60-second online event and included a plug to attend my class. It sold out in seconds!

CO: Congratulations! You have several milestones in the rearview. Looking to the future, what are your plans for Religion for Breakfast?

AMH: I would love to have more help. Days are needed just to make one video, 2-5 hours over seven days of the week, so my dream is to have a stable of writers, fact-checkers, and editors, but unfortunately, I need funds to do that. I despise unpaid labor, so anyone I work with must be paid fairly.

For the brand at large, I have an empire mentality, modeling after Vox. My immediate next goal is to start a podcast, then an online magazine similar to The Dealer or Religion Dispatches. I feel like I’ve found my niche in the edutainment category for religious studies, and I want to expand upon that.

AMH: The point I’m at now is trying to determine if my partnership success is because of me as a personality or me plus the content I create. I am trying to make Religion for Breakfast work both as a sustainable business model for myself, but also do my part for the academic community. At the end of the day, this project started out and continues to be completely a labor of love.

After They Graduate: A Conversation on Research Tools for Alumni

Atla Product Specialist Cristina Ochoa sat down with Director of Business Development Margot Lyon to discuss how Atla supports alumni and other unaffiliated scholars with their research pursuits.
Post

Our new tutorial video series launches with Three Methods to Search for Biblical Scripture Citations, which covers three different ways to search for scripture citations in the Bible.