SCOOP: “Open for Whom?” Reflections on the 2019 International Open Access Week Theme 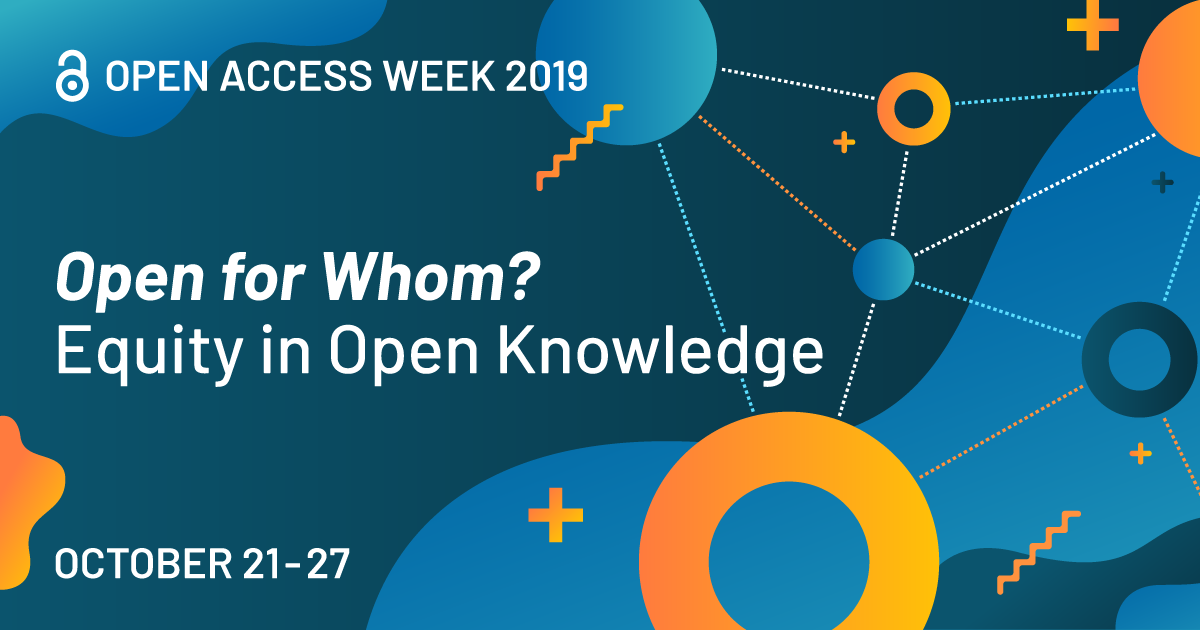 October 21-27, 2019 has been designated as International Open Access Week, and this year’s theme is “Open for Whom? Equity in Open Knowledge.”

Some of the tensions in this question are implicit in the call itself, which observes that “International Open Access Week  is an opportunity to take action in making openness the default for research—to raise the visibility of scholarship, accelerate research, and turn breakthroughs into better lives.” As librarians, many of us share a strong sympathy with this vision, particularly as it pertains to equity and enfranchisement. My presentation at Atla Annual 2019 involved open access to promote equity in theological scholarship in the majority world. Our hope in and for openness is, I believe, well-founded. Yet, at the same time, this year’s Open Access Week call reminds us that “Strategies and structures for opening knowledge must be co-designed in and with the communities they serve—especially those that are often marginalized or excluded from these discussions altogether.”  Some of our colleagues who work in and with those communities have been raising alarms about the unintended consequences openness can have for equity.

Power to the People…

Kim Christen is the Director of the Center for Digital Scholarship and Curation at Washington State University and has spent much of her career engaging indigenous communities in Australia and elsewhere for the preservation and dissemination of cultural heritage. She frequently felt that work put her in tension, however, between academic institutional imperatives for open access to both primary sources and published research on the one hand and the customs, conventions, and protocols of indigenous communities on the other. Often, the participation of these communities in projects that offered badly needed resources to preserve endangered knowledge, or opportunities to restore access to artifacts and records taken from them in the 19th and 20th centuries (through practices such as “digital repatriation”) were implicitly premised on their surrendering control over access to representations of rituals, customs, or objects that were intended to be limited to particular audiences.

Christen’s efforts to solve these problems have ranged from the creation of “Traditional Knowledge” labels for intellectual property to the development of the Mukurtu CMS—a content management system designed to “re-assert social relationships and boundaries” by offering content managers permissions systems and access restrictions that can be tuned to the practices of indigenous communities. For example, photographs of deceased persons can be screened from those ritually not permitted to see them after their death, or descriptions of ceremonies open only to men or only to women can be blocked from access by researchers of the opposite sex. In this way, proponents argue, local communities are empowered to preserve their traditions and to represent their own heritage in ways that are faithful to their own standards.

Critics of the approach taken by Mukurtu and related projects, however, raise points about the gatekeeping of community standards that these mechanisms can enshrine. Who speaks for the community? When is the accommodation of requests for access restrictions a mark of respect for the community’s autonomy and “local … governance”, and when is it a form of complicity in power structures being challenged internally by other community members? Shortly after learning of Mukurtu, I found many of the same colleagues I saw calling for indigenous communities’ traditional limits on information access to be honored cheering the controversial entry of two middle-aged women into the Sabarimala Temple in India—a space traditionally reserved to men and to women of pre- or post-menopausal age. No culture is static, no community is a monolith, and none of these access questions are easy.

This last example is particularly poignant for theological librarians and other information professionals working in theology and religion, as we engage so frequently not only with materials that touch on indigenous and post-colonial societies, but with a broad range of subcultures, religious sects, and social movements that share similar concerns around appropriate access controls, voice in interpretation, and respectful viewing, sharing, and description of materials.

Christen and her critics, like Indian activists and their protestors, can thus remind us during this International Open Access Week that the question “Open for Whom?” can have many different inflections. Information professionals in the developed world are used to voicing it as a challenge to barriers that exclude marginalized individuals from the conversations that shape our collective future. In other contexts, however, marginalized communities may voice it as a sincere concern about the threats openness can pose to their privacy and to the preservation of their ways of life.

It is a question that we must ask and keep asking in the awareness that even our simple interest in cultures and religious communities that are not our own can destabilize or reify traditions (or both) and can alter balances of power within internal processes of change and cultural contestation that we often do not understand. “Open for Whom?” remains an open question and one that has to be open to us all.

The University of Illinois iSchool offers an introduction to Traditional Knowledge labels.

Washington State University hosts a demo instance of Mukurtu for those who would like to see it in action. Zines produced by subcultures and fandoms for limited audiences present some of the same dilemmas. A post by Kelly Wooten (Curator of the Bingham Center Zine Collections) on “Why We’re Not Digitizing Zines” sparked a lot of academic conversation about privacy issues and authorial intention for limited distribution. Fanlore.org hosts highlights from content creators’ conversations about this issue, while a more formal survey has been done by Anne Hays.

This month’s column is guest written by Race MoChridhe, Atla’s new Scholarly Communication Coordinator. He draws on years of freelance experience in editing and publishing, alongside an academic background in both religious studies and library science, to build dynamic conversations around theological librarianship and information and religious literacy.

SCOOP: When Your Words are Your Work, Understanding the Work for Hire Doctrine

In this month's SCOOP, we discuss one of the often-misunderstood provisions of the U.S. Copyright Act, the copyright status of “works made for hire.”
Post

SCOOP: Students are Copyright Holders, Too