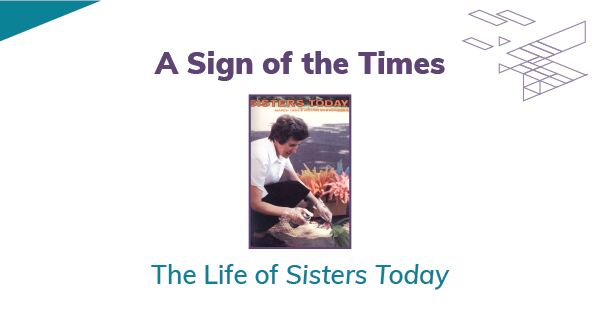 Sisters Today was the longest-running chronicle of women’s consecrated religious life in North America and is notable for having served as both a scholarly and civic publication for the community it served. Operating partially as a bulletin, it kept sisters apprised of what was happening in their communities, both at home and abroad.

Originally started in 1926 by Father Virgil Michel, OSB, and the monks of Saint John’s Abbey, Worship Magazine was a popular men’s worship magazine for parish priests that was pastoral in nature, including guidance for spiritual life and homilies. As the journal grew in popularity with its male audience, the leaders at Liturgical Press decided they should develop a similar publication for sisters. Thus, Sponsa Regis (Latin for “bride of the King”) was started and promoted for nuns and sisters, particularly those that worked in hospitals, schools, and convents. The publication was mainly comprised of articles on prayer life, convent life, and spirituality, closely mimicking its male counterpart. The editorial team at Liturgical Press knew their audience well, and Sponsa Regis caught on rather quickly (by about 1930) within the convent community, reaching hundreds of thousands of sisters across the United States. As the circulation grew, editorial duties were initially managed by a rotating list of monks from Saint John’s abbey from the Order of Saint Benedict, and later, sisters of the Order of Saint Benedict.

The original title, Sponsa Regis, was meant to be a utilitarian, descriptive title of and for sisters, because of their self-nomination as brides of Christ. In 1965, it was decided the original Latin title was no longer resonating with the journal’s audience, and so it was changed to Sisters Today. This name change symbolized and concretized the goal, focus, and audience for the journal: that it was not for the sisters of years ago, but for current sisters, offering applicable, practical advice for their lives today. The journal was not meant to be catechetical, but rather spiritual, a change closely mimicking the major shifts unfolding in the Catholic Church at that time.

The majority of the publication period of Sisters Today spans an era in which there was a tremendous change in Catholic consecrated life. In the first issue following the name change in September 1965, an article entitled “Obedience According to the Spirit” discusses the transformation taking place.

In accord with a widespread movement which today is questioning our rational formulations in nearly every field of social endeavor, many theologians have in recent years turned their attention to various practical aspects of the Christian’s ascetical life (for example, Vatican II’s schema on “The Church in the Modern World”), reviewing past conclusions and re-interpreting them from the side of the person and the community of persons which is the Church. (Willis 1)

Further, in “Learning to Listen,” Pope John Paul II is quoted, “Before speaking, it is necessary to listen,” followed by this declaration,

If Pope Paul’s program for dialogue with the modem world is to be implemented, Christians at all levels are going to have to learn to listen. Religious, long accustomed to their solo role in the classroom, pulpit, or monastic chapter must make a special effort if they are to become listeners. The call to dialogue and the related need for listening are especially timely now that there is so much talk about the lack of communication in the modem world. Contemporary writers have made much of this lack of communication, and now graduate students are having a field day writing dissertations on the lack of communication as a theme in individual authors or “schools.” (Smith 13)

The last issue of 1965 came in December, concurrent with the closing of the Second Vatican Council, and included an article entitled “The Psychology of the ‘New Breed’ of Religious,” which discussed how “the ‘new breed’ seeks Fulfillment, Authenticity, Change, Encounter, Freedom, Equality and Dialogue” (McCall 124). This was in reference to “major changes in attitude and behavior [that had] been noted in men and women religious,” who were at the time “designated by the term ‘new breed’” (124).

During its seventy-two-year print run (beginning as Sponsa Regis), Sisters Today was a key publication for sisters in providing pastoral, spiritual, and prayer life guidance, accompanying Catholic sisters on their journeys in consecrated life. Throughout that time, content was sourced depending on the editor’s community influences and preferences. Most of the editors through the journal’s lifetime worked to create a theme for each issue, soliciting sisters to write articles on each theme in advance of each print run, such as the future of consecrated life; vocation and ministry (both lay ministry and working with laity); international and interreligious issues; community life; scripture and theology; racial issues and religious life; and general spirituality even outside of consecrated life. The journal was also widely known for publishing poetry. In fact, Sisters Today was so popular and widely read, that there were always articles that came in unsolicited; all article ideas were always reviewed equally.

As much of a bulwark Sisters Today was for its audience, unfortunately, publication eventually ceased in 2000. It was, put simply, a sign of the times, due to growing financial constraints, a shift in content focus and audience retention, and a changing professional landscape among sisters.

After many successful years, the economical $4/year subscription fee could not be maintained, and it became unsustainable for sisters to continue to pay for their own subscriptions from their small personal discretionary funds.

The journal also lost much of its readership because it had become too academic. One of the last editors, Sister Mary Anthony Wagner, OSB, was a theology professor with a master’s in religious education from Catholic University and a doctorate in theology from Notre Dame University. Because of her academic stature, she was writing more for her peers than the original intended audience.

The audience had dwindled, but not its legacy.

Finally, after Vatican II, the professions open to sisters radically diversified, something Sister Mary Anthony personally reflected in her own academic initiatives and achievements. Unfortunately, this diversification proved to be too broad a scope for one journal to cover. This reality, combined with the trend that many fewer sisters were taking up the mantle in the United States, ultimately ushered in the end of publication of Sisters Today.

The audience had dwindled, but not its legacy.

The last editor of Sisters Today and Director of Liturgical Press, Peter Dwyer wanted to ensure the journal’s legacy would be maintained and preserved, working closely with the Atla team to ensure a smooth transition. All indexing and back issues of Sisters Today (c. 1965) are available in Atla Religion Database® (Atla RDB®) and AtlaSerials PLUS® (Atlas PLUS®).

Learn all about the history, scope, and legacy of the Journal for Christian Theological Research, a ceased journal in AtlaSerials PLUS® (Atlas PLUS®).
Post

Learn how Atla’s in-house team is committed to seeking out historically significant publications, assisting in their preservation, and ensuring their scholarly significance persists.