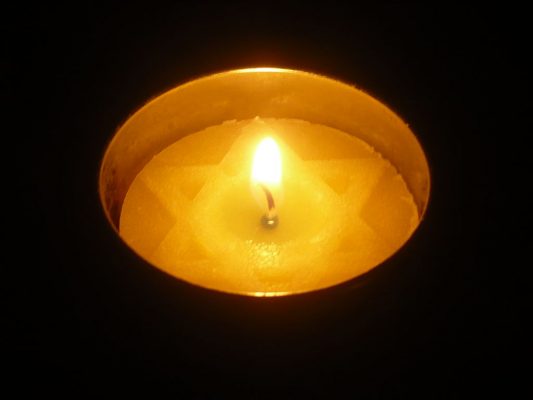 A single murder is a tragedy; a million deaths is a statistic. This quote of murky origins and multiple variations illustrates the two extremes of the emotional impact of the Holocaust. From the distance of 75-80 years, we might focus on the statistics. But for surviving Jews, the Holocaust was the murder of one or two or ten or all of their family members — a staggering tragedy.

It is clearly ridiculous in one blog entry to summarize the systematic murder of six million Jews and additional millions of Soviet POWs, Roma, physically and mentally disabled, “asocials,” Jehovah’s Witnesses, and gay men, but I’ll give it my best shot. In the late 1930s, a perfect toxic storm of nationalism, antisemitism, increased investment in the eugenics movement, and the rise of a charismatic leader — Adolf Hitler — swept through Germany. In 1933, the Nazis enacted a series of laws against Jews beginning with boycotts of Jewish businesses, continuing with complete disenfranchisement of Jews from German society and state, and culminating in a plan to make Germany “Jew-free” by the methodical murder of anyone with Jewish blood.

Yom ha-Shoah, short for Yom Ha-Zikaron la-Shoah vela-G’vurah (Holocaust and Heroism Remembrance Day) takes place on the 27th of the Hebrew month of Nisan. With many significant days to pick from, Israel chose a date between the beginning of the Warsaw Ghetto Uprising (which occurred on the first day of Passover) and Israel’s Memorial Day and Independence Day. It was important to Israel to commemorate not only the victimhood of the Jews, but also their resistance and heroism. Yom ha-Shoah usually occurs in April of the Gregorian calendar. This date was set by the Knesset, Israel’s legislative body, in 1951 and officially established in 1959. In the United States, the week (from Sunday to Sunday) in which Yom ha-Shoah occurs is designated as The Days of Remembrance of the Victims of the Holocaust. While some countries adopted the date selected by Israel, most observe the United Nations’ choice of January 27 for International Holocaust Remembrance Day — the day the Soviet Red Army liberated the Auschwitz death camp.

Arguably, the study of the Holocaust as an academic subject began in 1961 with Raul Hilberg’s Destruction of the European Jews. As German archives opened and survivors started telling their experiences, the field expanded quickly. Ninety years after the Nazis came to power in Germany, incidents of antisemitism have risen in the United States and around the world and Holocaust deniers are finding more media outlets; therefore, it is clear that we need to continue to educate people about the Holocaust.

The aftermath of the Holocaust left Jews (and of course many others) with a multitude of questions. (This stereotype is true; Jews love a good question.) Can God be all-knowing, all-powerful, and also all-good? Where was God during the Holocaust and why did God allow this to happen? If God did allow the Holocaust to happen, is this a God that we want to continue to follow? Did God die during the Holocaust? What is the purpose of suffering? Were we being punished for some wrongdoing? Tested in our faith? Where was man? How do we continue to relate to Christians? What are we called to do in terms of other people’s suffering?

As a relatively new holiday, there are no set observances. In Israel, most entertainment businesses are closed for the day and special programs are held in schools and other public institutions. In the United States, sometimes the Kaddish or the El m’ley Rachamim, the traditional prayers for the dead, are recited; candles may be lit and special poems or other prayers said (see the resources below). In Jewish practice, only the immediate family of someone who died is officially counted as a mourner. But many congregations, especially Reform, have the whole congregation recite the mourner’s Kaddish for the many people murdered in the Shoah who had no remaining family members left to mourn them.

Overviews of the Holocaust

Yom ha-Shoah and its Observance

Theology During and After the Holocaust

This article is part of the Atla Committee for Diversity, Equity, & Inclusion’s semi-regular articles designed to provide theological and religious studies librarians with resources and advice for providing equitable access and research to the full spectrum of human diversity. Guest writer, Sheryl Stahl, is the Library Director of the Hebrew Union College – Jewish Institute of Religion. She is an active of the Association of Jewish Libraries (AJL) where she has held the positions of Treasurer, Vice President of Membership, and webmaster. She is also active in the Southern California Area Theological Library Association (SCATLA).

This year's Black History Month theme is African Americans and the Vote. Atla's DEI Committee discusses voter suppression and our role in countering it.
Post

The DEI Committee shares what diversity, equity, and inclusion means to them individually and how this helps them fulfill their committee's charge.