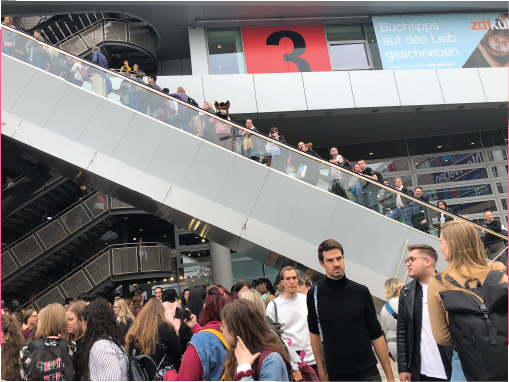 The Frankfurt Book Fair has long been the publishing world’s largest annual event. Held every October in Frankfurt am Main, Germany, it reliably attracts the largest gathering of publishing professionals in the world. This is not only due to its central location between Asia, Africa, and the Americas, but also its history.

The Frankfurt Book Fair, or ‘Buchmesse’, has been occurring in one form or another since 1454 when the Guttenbergs invented movable type down the road in Mainz. This started a print and manuscript trade out of Frankfurt that would evolve into the largest in Europe, and eventually the world. The Messe is said to have played a key role in the Reformation and the Enlightenment, when text was rare, and the proliferation of printed documents were highly valued. Historically, it is possible to trace most of the western world’s print trade through Frankfurt. In many ways, this is still true more than 500 years later.

The five day fair holds constant events, and the four halls each contain multiple stages. Atla attended the SSP Scholarly Kitchen Chef’s round table, where the contributors to the popular industry blog shared thoughts on current issues in academic publishing.

For Atla, attending the Buchmesse has been essential to our growth. More than 7,400 exhibitors from over 100 countries attend, so the potential for discovery of new partners is always high. But most importantly, it is the only place major international publishers in the theology space gather all at once. Many publishers set up booths by country where local reps from university presses, trade publishers, and distributing services are all available. Atla has met new publishers from Singapore, Indonesia, and the Philippines thanks to this opportunity.

Atla has been attending the fair for seven years now, and every year the licensing team comes back with new information we would not have come by otherwise. It is also a chance to share what Atla does with publishers who have never heard of us before. 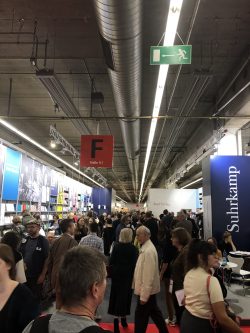 Due to the high concentration of industry professionals, the Buchmesse is also the place where many publishers announce their most important news for the year. We learn about acquisitions, launches, new appointments, new projects, and personnel changes. Since everyone is there, we also get to meet the international colleagues of our US-based counterparts. We even meet with our US-based partners we don’t get to see throughout the year.

Learn more about the Atla licensing team and how to get in contact with us.

While there is a lot happening, the core of the fair is foreign rights licensing, in which Atla is tangentially involved. This is where most translation deals for the year are made for the trade publishers. It is also a place where new advances in publishing are displayed. This year, for example, there was a large AI presence right next to the antiquarian book display. The first three days of the fair are for professionals only. The last two are open to the public and include a Comic-con like festival with a costume contest and author signings. There are readings, major literary prizes, and if you’re lucky, a discovery of something new you didn’t know existed before. In all, the Messe is all-things publishing, and for the Atla licensing team, it is the most anticipated event of the year.

Inspirations and Intersections Around the World

A list of meaningful news articles and projects that inspired Director of Business Development Margot Lyon over the past year related to libraries, archives, religion, and digital humanities.